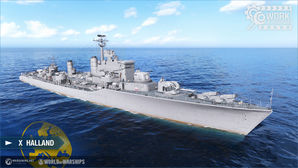 The largest and most powerful destroyers in the Swedish Navy. Their main advantages were their powerful AA defenses and extremely rapid-firing main battery artillery.

Like her predecessor ship, Halland shares many of their same strengths and weaknesses. Though her base HP pool is mediocre, this is compensated by her access to Repair Party

. With the right ship upgrades and captain setup, Halland can effectively have up to ~38,000 HP assuming all 4 heals are used efficiently. This is very important as Halland does not carry Smoke Generator

and typically takes more damage when disengaging. The heals allow Halland to remain a threat into the late game when many other DDs are low on consumables or at critical health.

While Halland isn't considered a gunboat DD, her 4x 120mm guns still output considerable damage, actually having higher HE DPM than most DDs (at least on paper). Unlike the previous Pan European DDs, Halland's turrets have reasonably fast turret traverse rates. These traits allow Halland to fight DDs at close range in a pinch. In these scenarios, her low gun range actually works to her advantage. If the enemy DD breaks detection and no other enemy ship is within her low gun bloom detection, then she can drop detection immediately. At longer ranges, her poor gun performance becomes apparent with long shell travel time and short-range. Due to her lack of access to Smoke Generator

, it is generally ill-advised to rely on her guns outside of fighting other non-gunboat DDs.

As the highest tiered Pan-European tech tree DD, Halland has access to the best of the Pan-EU torpedoes. Though they have the lowest damage, they are the fastest torps in the game with good range and relatively fast reload times. She even gets access to a "Super-Narrow" spread like the other Pan-EU DDs. These traits combine to make Halland one of the most consistent and effective torpedo DDs in the game.

active, Halland has the most powerful AA of any DD in the game, capable of swatting down waves of attack planes without breaking a sweat. Better yet, she can turn her AA off and ambush planes with her small aerial detection radius. All but the most skilled carrier players will fear her AA capabilities.

Halland 's maneuverability at best is considered acceptable. Though she has a relatively tight turning radius, she is one of the slowest DDs in the game. Some faster cruisers and even a few BBs can match her pace or even outrun her. Still, this is enough for Halland players to rely on their respectable turning ability to evade shells.

When properly outfitted, Halland 's concealment can be lowered to a respectable 6.0km. This is competitive with all but the IJN torpedo-focused DDs, Gearing equipped with her legendary upgrade, and a few other DDs with very low surface detection. Halland 's detection is low enough for her to perform the traditional DD roles, including spotting for her team, fighting other DDs, and contesting capture points.

Halland plays very similarly to her lower-tier counterparts in the line; a smokeless torpedo-focused DD who can defend herself from other DDs and CVs. Halland 's torps trade raw damage for consistency; though they are unlikely to kill enemies in 1 strike, the numerous fast torps can whittle down enemies or at least force them to stay on their toes. Even enemy DDs may find her torps difficult to dodge due to their sheer speed. These torps are her main offensive weapon, so it is recommended to invest heavily in them to land more torpedo hits. Though her guns have potential, Halland 's lack of smoke makes it difficult for her to trade efficiently against anything bigger than another DD. That being said, Halland can bully other isolated non-gunboat DDs due to her respectable firepower. If possible, Halland players should force favorable engagements with other DDs as their heal allows them to attrition most other DDs to death. Basically, Halland 's goal is to win the spotting advantage for her team by killing other DDs with her fast torpedoes and effective guns. If this isn't possible, she can harass enemy capital ships with her long-range torpedoes and screen enemy torpedoes for her own. When playing near capture points, Halland should save her torpedoes for when the enemy DD smokes. A well-timed torpedo attack on a vulnerable DD can net you both a kill and control of the capture point.

What really makes Halland truly shine is during CV matches. Unlike other DDs, CVs are usually reluctant to focus Halland due to her formidable AA suite. They will lose a lot of planes even during successful runs. Whereas other DDs have to play more cautiously, Halland can play somewhat more similar to a non-CV match, potentially allowing for better torpedo angles or more aggressive plays in certain situations. She can also provide effective AA cover for her allies. Keep in mind CVs will spot her when AA is active, so try to avoid being spotted in a vulnerable position. It is not an effective trade if you exchange half your health to enemy surface ships for an entire enemy attack squad.

Overall, Halland is a potent DD. Easy to play with her long-range torps, but is difficult to master because of her lack of smoke and the unforgiving nature of the Tier X metagame. Those who take the time to learn Halland 's strengths and weaknesses will be rewarded with a strong versatile ship with an answer for almost every situation.

The recommended upgrades for Halland are as follows:

Ships of Europe
Destroyers
Retrieved from "http://wiki.wargaming.net/en/index.php?title=Ship:Halland&oldid=321428"
Categories:
Your location:
To log in, select the region where your account is registered
CIS Europe North America Asia
Or use Microsoft Login to enter WoT XBOX ecosystem
Log in