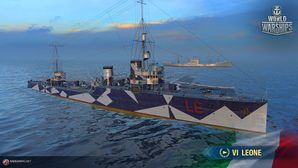 A very large destroyer in comparison with her contemporaries, officially classified as a "light scout" for a long time. One of the ship's features was 8 main battery guns placed in 4 twin mounts.

As a premium ship, Leone doesn't have any upgrades to research.

The recommended upgrades for Leone are as follows:

Leone can equip the following consumables:

As a premium ship, Leone comes with Default permanent camouflage and a set of permanent combat bonuses.

The Leone class were a group of destroyers built for the Italian Navy in the early 1920s. Five ships were planned and three completed. All three ships were based at Massawa, Eritrea during World War II and were sunk during the East African Campaign.

Ships of Italy
Destroyers
Retrieved from "http://wiki.wargaming.net/en/index.php?title=Ship:Leone&oldid=319469"
Categories:
Your location:
To log in, select the region where your account is registered
CIS Europe North America Asia
Or use Microsoft Login to enter WoT XBOX ecosystem
Log in