Homepage/
World of Warships/
Loyang B 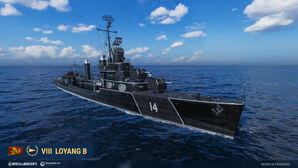 A destroyer specifically built for the U.S. Navy, boasting powerful AA guns and a high speed. She was handed over to the Navy of the Republic of China in 1954. Her armament comprised dual-purpose main guns and quintuple torpedo tubes.

Loyang B first went on sale on 19 November 2021 during the Black Friday event.

Loyang B, or Loyang Black, is a clone of Loyang with an attractive black skin.

Loyang B can be best summarized as a German version of Benson, trading raw firepower for the ability to mount a powerful Hydroacoustic Search

. Similar to Benson, Loyang B remains a highly flexible destroyer thanks to her potent combination of Smoke Generator

, and excellent concealment. Skilled Lo Yang captains can use those tools to their advantage to lock down capture points, duel other spotting destroyers, and provide torpedo screening for the fleet. Though Loyang B is a relatively difficult ship to play correctly, a well captained Loyang B is able to support their team to victory.

While Loyang B is a highly capable ship, her base stats are generally average with a few exceptions. Her base HP pool is mediocre for a T8 DD, sporting only 14,600 HP at baseline and 17,400 HP with Survivability Expert. Armor is the typical T8 DD profile of 13mm for her superstructure and 19mm for her hull; wholly inadequate for protecting against any shell aimed at her. Worse yet, Loyang B is woefully inadequate to deal with carrier attacks. Loyang B simply lacks the AA to reliably stop the carriers from striking her over and over. Thankfully this is more than offset by her exceptional maneuverability; her tight turning radius, responsive rudder shift, and thin hull allow her to weave between enemy salvos and air attacks alike.

Unfortunately, Loyang B 's offensive can be best described as average at best. Though Loyang B 's gun firepower is average for a Tier 8 DD, it quickly drops off at longer ranges due to the floaty shells both making it difficult to aim and giving enemies more time to dodge. Both of Loyang B 's torpedo options have notable limitations compared to other DDs. Her stock torpedoes are the same as Benson 's stock torpedoes, having good range but low damage. Loyang B 's alternative torpedo option has the same damage as Benson 's upgraded torps and travels much faster, but at the cost of a low 6.7km range. It is the player's choice whether to run the safe but low damage torpedoes, or the high-risk high reward alternative torpedoes.

What makes Loyang B truly terrifying is her deadly smoke + hydro combination. When built for full concealment, Loyang B will have a surface detection range of 5.8km, better than the vast majority of the DDs she faces. Combined with a Hydroacoustic Search

that can spot enemy ships at 5.5km, enemies only have a 300m buffer to react before they stumble into her hydro range. Loyang B can then smoke up and attack the enemy destroyer with near impunity; the hydro providing spotting and the smoke hiding her hull. When employed properly, Loyang B can comfortably out-trade almost any DD caught in her trap even against higher tier DDs. This tactic is especially effective in capture points and near islands as Loyang B can set up ambushes and keep DDs even longer in her hydro range for her or her allies to attack. Still, this deadly combination is not without limitations. Radar ships can force Loyang B out of her smoke, with the Russian cruiser's 12km radar being especially dangerous. Enemy DDs can blind fire and launch torpedoes at Loyang B 's last known position, damaging or forcing her out of smoke. Finally, Z-52 can completely negate this tactic as her hydro out ranges Loyang B 's own hydro.

When not employing this tactic, Loyang B remains a very effective destroyer in their traditional roles of spotting and providing support for her allies. Loyang B 's 5.8km concealment will let her out spot most enemy DDs with the exception of the high tier Japanese DDs and the British DD Lightning, all of which Loyang B can take effective engagements against. Some high tier DDs with similar concealment ranges can outgun Loyang B, so take care to have your smoke available or have nearby allies to even the odds. As a support ship, Loyang B is one of the best DDs around as she can lay a long duration Smoke Generator

Overall, Loyang B is one of the better destroyers in World of Warships, capable of providing a valuable contribution to any team she finds herself on whether it is supporting allies, taking capture points, or sinking enemy ships.

As a premium ship, Loyang B has no module upgrades to research.

The recommended upgrades for Loyang B are as follows:

to maximize Loyang B 's usage of Hydroacoustic Search

Captains are recommended to spend the first 13 points on the following skills:

Once the core skills have been taken, captains can begin to customize their Loyang B commander based on their playstyle. Captains focusing on a more offensive playstyle should consider taking Torpedo Armament Expertise, the 3pt skill Main Battery and AA Specialist, and/or Demolition Expert. Captains looking to play a support or objective-focused playstyle should consider taking Superintendent, Swift in Silence, Radio Location, and/or Consumables Enhancements. Of course, captains can take skills from both categories to fully complement their own playstyle.

Loyang B can equip the following consumables:

It is recommended to only take Hydroacoustic Search

in slot 3 for Loyang B as her excellent hydro is what sets Loyang B apart from every other DD. Defensive AA Fire is a poor choice as Lo Yang's AA isn't enough to deter attacking aircraft even with the consumable active. Engine Boost

also isn't recommended as she essentially becomes a completely inferior version of the Benson.

As a premium ship, Loyang B comes with Default permanent camouflage and a set of permanent combat bonuses.

) is always a good signal to use on destroyers to avoid detonations. Sierra Mike (

) is a great pick for Loyang B as the extra mobility is always appreciated. If the player is low on signals, it is recommended to conserve the signals for ranked.

Detached from this duty late in January 1945, Benson returned to the United States for yard repairs and training during February. After a convoy-escort run to Plymouth, England, in April, the destroyer received orders to the Pacific. Accordingly, she transited the Panama Canal on 12 May and reached Pearl Harbor on the 29th. The destroyer spent a bit more than a month in Hawaiian waters and then got underway on 14 June to escort aircraft carriers USS Lexington (CV-16), USS Cowpens (CVL-25) and USS Hancock (CV-19) in their air strikes against Wake Island. Then, following upkeep at Leyte in the Philippines, she proceeded to Ulithi. Until VJ day on 15 August, the warship performed convoy and patrol duty between Ulithi and Okinawa. She served in the screen for the first occupation troops for Yokohama, who landed on 2 and 3 September 1945.

In the two months following the surrender of Japan, the destroyer escorted five different convoy groups between the Philippines and Tokyo Bay. Ordered back to the United States for inactivation, Benson got underway from Yokohama on 4 November 1945 and moored at the Charleston Navy Yard, on 6 December. She was decommissioned there on 18 March 1946, placed in reserve, and assigned to the Charleston Group of the Atlantic Reserve Fleet.

On 26 February 1954, Benson was transferred to the government of the Republic of China, and she served as Loyang B (DD-14) into the mid-1970s. As the result of a survey made of her early in 1974, she was replaced with another American destroyer that the U.S. Navy loaned them in 1975, the former USS Taussig (DD-746), which then became Loyang B (洛陽號) (DD-14). Meanwhile, Benson’s name was struck from the Naval Vessel Register on 1 November 1974 and she was sold for cannibalization and scrapping.

Benson (DD-421) earned four battle stars for her World War II service. As of 2008, no other ship in the United States Navy has been named Benson.

Ships of Pan-Asia
Destroyers
Retrieved from "http://wiki.wargaming.net/en/index.php?title=Ship:Loyang_B&oldid=322031"
Categories:
Your location:
To log in, select the region where your account is registered
CIS Europe North America Asia
Or use Microsoft Login to enter WoT XBOX ecosystem
Log in