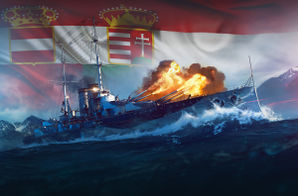 The lead ship of the sole series of the Austro-Hungarian Navy dreadnoughts. By applying a rather heavy arrangement, the designers were able to create a well-armored battleship of a relatively small size, with powerful weapons consisting of twelve 305 mm main battery guns.

Viribus Unitis was first released for sale on 3 October, 2019

Viribus Unitis is the first Austro-Hungarian ship to enter World of Warships and currently sits at Tier V of the European tree as a premium ship, making her also the first European battleship to enter the game.

One of Viribus Unitis's strengths can be found in her main armament. With twelve main guns distributed in four triple turrets she can throw a large volume of shells towards her target while her reload is on a reasonable level, giving her a very good shell output over time. The main shell type as for most other battleships should be AP, as the fire chance and Alpha Damage of Viribus Unitiss' HE shells are not particularly noteworthy. However, there are also downsides to Viribus Unitiss' armament. To begin with, the turret rotation is fairly slow meaning that captains should plan in advance which side to fire at. Furthermore it should be noted that the firing angles of the main guns are akin to Großer Kurfürst, resulting in a high risk being taken whenever one wishes to unleash a full broadside. Lastly, the main battery range is the lowest of any Tier V battleship except Pyotr Velikiy. The secondary armament is lacking in both hitting power and range and should thus not be considered when outfitting Viribus Unitis. Instead, focus should be laid on improving the main battery as much as possible with Aiming Systems Modification 1.

Being a ship from the era of dreadnoughts, Viribus Unitis boasts a lot of distributed armor. The casemate is armored with 180mm sides making them immune to any HE shells and a lot of small and medium caliber AP, while the 30mm midship decks ensures good HE resilience there. A 150mm strong extension of the main belt covers large areas of the bow, resulting in a great difficulty for incoming shells to hit the citadel through the bow of Viribus Unitis. A turtleback ensures a good resistance of the citadel against shells coming through the belt armor, and if a shell does manage to explode within Viribus Unitis's citadel her Repair Party allows her to recover 33% of the damage taken instead of only 10%. These advantages do come at a price however. Viribus Unitis has by far the lowest hitpool of any Tier V battleship, even being below numerous Tier IV and Tier III ships. What this means is that even normal penetrations can result in the loss of a large percentage of the hitpool. The lower percentage of casemate damage being healed by her Repair Party further amplify this problem, making Viribus Unitis exceptionally vulnerable against overmatching shells. For this reason it is heavily recommended to invest into captain skills such as Basics of Survivability and Fire Prevention.

The maneuverability of Viribus Unitis is a mixed bag. Her top speed is at the bottom of Tier V battleships, however her turning characteristics are very good. A quick responding rudder and the smallest turning circle of any battleship in her MM spread allow for fast changes of direction, which do come in handy when considering the turret traverse angles of the main battery.

Viribus Unitiss' greatest weakness lies in her vulnerability against aircraft. Lacking any sort of meaningful AA defense her only hope is to dodge the dropped ordnance or to stick close to teammates with better AA defenses.

The way Viribus Unitis should be played is by prioritizing cruisers over other targets. Trying to stick to allies for protection against aircraft and to have them act as shields against returning fire is heavily recommended. Open duels against other battleships should be avoided whenever possible due to the vulnerability of Viribus Unitis against large caliber AP shells. In particular when facing Tier VII ships Viribus Unitis will have to be very careful with her movements.

As a premium ship, Viribus Unitis doesn't have any upgrades to research.

The recommended upgrades for Viribus Unitis are as follows:

As a premium ship, Viribus Unitis comes with Default permanent camouflage and a set of permanent combat bonuses.

The Tegetthoff-class were the first and only dreadnought battleships of the K.u.K. Kriegsmarine. They were designed in response to the efforts of Archduke Franz Ferdinand and Navy Chief of Staff Rudolf Montecuccoli to modernize the Austro-Hungarian fleet in the face of their rivals, the much more powerful Regia Marina of Italy.

The ‘Dreadnought revolution’ offered the small Austrian fleet a chance to close the gap, as both fleets would be forced to re-start construction of their battlelines. The design process for the first of Austria’s dreadnoughts began in October 1908 under the naval architect Siegfried Popper, and was accelerated by the news that Italy was also moving towards its first dreadnought – Dante Alighieri, which would be laid down on 6 June 1909 and be the first battleship with triple turrets.

The Tegetthoff-class weighed in at 20,014 tons normal and 21,595 tons at full load, with an overall length of 152.2 meters (151 meters by the waterline) and a beam of 27.3 meters – making them fairly ‘stubby’ ships. A unique quirk of these battleships was the inclusion of a ram bow. The propulsion systems were powered by twelve Yarrow-type boilers arranged in two boilers rooms, each containing six boilers (three across, two deep). These fed four Parsons steam turbines, which generated 25,000 shp for a design top speed of 20 knots – although this was not possible to achieve in service.

The main armament was formed by twelve ‘30.5cm/45’ (actually 42.6) in four triple superfiring turrets (A-B-X-Y). These guns fired 450 kg 4crh APC shells at a muzzle velocity of 800 m/s, with a maximum ballistic range of 22,000 meters at +20° elevation (the maximum elevation of the guns). The shells, which had a high-quality cap design for the era, were capable of penetrating 475mm of Krupp Cemented armor at a range of 6,000 meters, falling to 272mm at 10,000 meters. Maximum firing rate was 2 rounds/minute per gun. The secondary battery was made up of twelve casemate-mounted ‘15cm/50’ (actually 149.1mm/47), which fired 45.5 kg shells (APC or HE) at rate of six rounds per minute. Also included was eighteen ‘7cm/50’ (actually 66mm/47) anti-torpedo boat guns, which fired 4.5 kg HE shells at a rate of 15-20 rounds/minute. Fire control arrangements for all weapon systems remained relatively simple, being loosely patterned off of German methods.

The main armor belt of the ship was 280mm thick, and made of Witkowitz improved Krupp cemented armor – a unique variation of the standard Krupp cemented armor, the best of its type used in the First World War. The armor belt extended the entire length of the citadel (was closed by 160mm plates), and extended almost to the bow and stern with 150mm plates (extreme plates on stern and stem were 110mm thick). The upper portion of the armor belt was 180mm thick, and its extensions to the stern and stem were 110mm thick. Casemate armor was 180mm thick, and covered by 30mm armor plate. The main armor deck was 36mm thick, and connected to the bottom of the main armor belt via 48mm thick turtleback armor slopes. Main battery turrets had 200mm faces, 280mm sides and rears, and a 60mm roof. The barbettes were 280mm thick.

On the whole, the ships appeared well armed and armored – they were quite modern in appearance, too. However, the Tegetthoff'-class was riddled with numerous design flaws that severely reduced their fighting capacity, to below that of contemporary dreadnoughts. The ships were not very stable, and were not suited to operations in the open sea. On trials it was found that the ships would heel over at 19° in high-speed turns – and that the righting arm (i.e., the maximum angle from which the ship could recover) was only 25°. Not only did this mean that turning would expose the unarmored underside of the ship to enemy fire, but also that such turns would be impossible in the event of significant damage due to the risk of capsizing. This was largely the result of the ships being too small for their armament and needed to be 2,500 tons larger. This also led to the warping of longitudinal frames and the keel below the main battery turrets, due to their weight being more than the hull could handle. Additionally, they proved unable to reach their planned top speed of 20 knots – in service it was found impossible to work up past 17.5 knots, rendering them the slowest dreadnoughts of their era.

The armor scheme itself also carried numerous flaws, primarily through unprotected gaps in the armor – such as the space between the barbette and gunhouse, or for the copula holding the turret rangefinder, as well as the armor deck where the overly-large openings for the funnels could allow even small anti-torpedo boat guns to penetrate into the engine room. The funnel uptakes were also entirely unarmored. The main battery also represented an additional weakness, as the Tegetthoff, unlike any foreign dreadnought, did not use interrupted hoists, increasing the risk of flashback, and ammunition stored in the handling room (used as a ready ammunition room) was found to be at risk of detonation from near misses to the ship.

Flaws in the armament were not limited to the above. The triple turrets were not well balanced, and as a result required ammunition to be reserved on the ready racks at the back of the turret to help balance the weight of the guns. Additionally, as it was impossible to ventilate the turret while it was in action, the gun crews only had enough oxygen for 15 minutes of action. The casemate for the 15cm battery lacked any ventilation in the first place, which meant they would be forced to go out of action as soon as any smoke entered their compartments The result of these flaws was to render the Tegetthoff-class largely unsuited for combat with other warships, making them one of the worst dreadnought battleships ever built.

Ships of Europe
Battleships
Retrieved from "http://wiki.wargaming.net/en/index.php?title=Ship:Viribus_Unitis&oldid=324421"
Categories:
Your location:
To log in, select the region where your account is registered
CIS Europe North America Asia
Or use Microsoft Login to enter WoT XBOX ecosystem
Log in