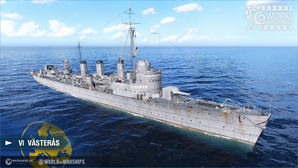 The design of a large, fast-moving, and well-armed destroyer, developed by Swedish shipbuilders for the Polish Navy. All of her main battery artillery was placed in twin mounts.

Tier VI destroyer Vasteras embodies the standard characteristics of the European destroyer line. Although she features many of the trademark European strengths, such as fast reloading torpedoes and the Repair Party

consumable, she lacks other important strengths of higher tier ships of the line.

In terms of armament, Vasteras can be considered a gun-torpedo hybrid in many regards. Her torpedoes have a very quick reload time of just under one minute, which is the fastest at Tier VI. They boast a fairly long range, and decent speed. Because of these strengths, the torpedoes have a pitiful alpha damage of 7,533, which is by far the lowest of all Tier VI destroyers. This prevents Vasteras from being able to successfully rush and kill enemies at close range. In terms of gun power, Vasteras is fairly weak. She has six 120mm guns in three double turrets, one bow and two aft. These turrets, similar to Visby’s, have a very poor turret traverse speed, making close range engagements with enemy destroyers difficult. The long reload and bad HE fire chance, along with the small gun caliber, make damaging armored enemies with guns unviable as a source of damage.

Vasteras has a mediocre HP pool of 12,100 fully upgraded. As with all destroyers, use of the Survivability Expert skill is highly recommended. Despite this medium amount of health, she gets access to the Repair Party

As a European destroyer, Vasteras has one of the strongest AA suites of her tier. Her AA range is longer than her air detectability, so players should disable AA guns until she is spotted by planes in order to preserve her concealment. Although Vasteras' AA appears to be stronger than other Tier VI destroyers, it is unlikely that they will be able to defend her from a Tier VI carrier, and a Tier VIII carrier will surely be able to attack her.

Taking all her characteristics into account, captains of Vasteras should adopt a long range playstyle, using her good concealment and excellent torpedo range to attack sluggish targets from range. Due to her poor turret traverse and bad gun DPM, and especially due to her lack of Smoke Generator

, Vasteras players should avoid contesting key areas and fighting other destroyers early in the game. However, the extra survivability provided by her Repair Party

can make a significant difference in the later part of the match.

Availability of researchable upgrades for Västerås is as follows:

The recommended upgrades for Västerås are as follows:

Västerås can equip the following consumables:

Ships of Europe
Destroyers
Retrieved from "http://wiki.wargaming.net/en/index.php?title=Ship:Västerås&oldid=317557"
Categories:
Your location:
To log in, select the region where your account is registered
CIS Europe North America Asia
Or use Microsoft Login to enter WoT XBOX ecosystem
Log in