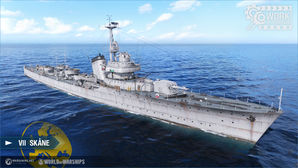 The design of a destroyer armed with dual-purpose main battery artillery. The ship served as a prototype for the Swedish Öland-class destroyers that were commissioned after World War II.

Skåne is the Tier VII European destroyer for the tech tree that introduces a standard configuration that continues through the end of the line to Tier X Halland. While her predecessor Vasteras embodies pre-war design, Skåne is a preliminary war-time design with an overall configuration that was realized in post-war destroyers built a decade later. While Skåne loses one main battery turret, the remaining two dual turrets are quick firing with more than double the rate of fire and are also dual purpose for good AA capability.

Skåne's torpedoes are fast with a quick reload and range out to 12 km (with the Torped M1943 module). Their alpha damage is low, a trait that applies to the entire European destroyer line.

Skåne has significantly improved AA compared to lower tier members of the European destroyer line, in particular the improved range, but like any destroyer she still can be severely damaged by carrier aircraft, particularly due to her low HP and the absence of a smoke generator. She must be careful when sailing out of range of friendly AA support.

European tech tree destroyers lack smoke to break detection or the hydroacoustic search capabilities that counteract the dangers of sitting in smoke. Instead, their captains must learn to use their superb maneuverability (and terrain) to dodge enemy fire and ultimately break contact. Rather than seizing caps or yoloing large ships, destroyer hunting, especially though ambush, seems to be their best mission. While Skåne's concealment isn't great, with a 10 point commander she can achieve 6.2km detectability.

Overall game play is similar to Vasteras. Skåne's captain must carefully manage detection, plan ahead for disengaging, and engage only when favorable. She will use her torpedoes to weaken and harass enemy ships, especially enemy ships in smoke, while remembering that the low alpha will probably require additional damage to secure a kill. Her superior rate-of-fire can gun down other destroyers at her tier, especially if she has a hit point advantage, and can finish off wounded destroyers or even cruisers.

In many games, Skåne can be a winning factor when played wisely, and she provides training and experience that will carry all the way to Tier X.

The recommended upgrades for Skåne are as follows:

Ships of Europe
Destroyers
Retrieved from "http://wiki.wargaming.net/en/index.php?title=Ship:Skåne&oldid=318676"
Categories:
Your location:
To log in, select the region where your account is registered
CIS Europe North America Asia
Or use Microsoft Login to enter WoT XBOX ecosystem
Log in