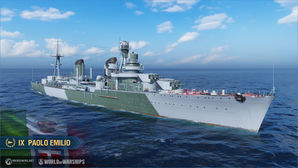 The project of a relatively large and a very high-speed "armored reconnaissance ship" with a powerful main battery, developed by the Ansaldo company under Project UP 39. Paolo Emilio was the predecessor of the Capitani Romani-class light cruisers.

Also known as 'Yolo Emilio', Paolo Emilio has a very dangerous trick up her sleeve. Using her Exhaust Smoke Generator

, she can rush a battleship undetected and untargeted, pumping the contents of one or two torpedo racks into her victim from relatively close range. Very few ships can survive a strike by four or eight 24K warheads. Then, if she's lucky, Paolo Emilio can go dark to plan another attack.

As a premium ship, Paolo Emilio doesn't have any upgrades to research.

As a premium ship, Paolo Emilio comes with Type 10 camouflage that lowers her detection radius, reduces the accuracy of incoming shells, reduces her service cost, and increases the amount of experience she earns.

Ships of Italy
Destroyers
Retrieved from "http://wiki.wargaming.net/en/index.php?title=Ship:Paolo_Emilio&oldid=318286"
Categories:
Your location:
To log in, select the region where your account is registered
CIS Europe North America Asia
Or use Microsoft Login to enter WoT XBOX ecosystem
Log in