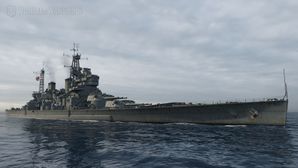 A battleship that is one of the draft designs for a King George V warship equipped with 381 mm main battery guns.

A Tier VII Canadian battleship based on HMS Monarch with a powerful healing consumable. She is very short ranged with a slow reload time on her main battery guns. However, she has good handling and concealment characteristics.

Yukon is a damage-sponge. She doesn't so much tank incoming fire as absorb it. Her armor layout is poorly designed for resisting damage. Just about every attack thrown her way will take off big chunks from her hit point pool. However, between her good concealment and rudder shift time, Yukon is fairly apt at hiding and dodging. Furthermore, her Specialized Repair Team is monstrous. Should she be allowed to disengage and heal, she can keep coming back again and again. It is only damage done to her citadel, be it from bombs, torpedoes, or shells that slows Yukon down.

The challenge with playing this ship is dealing with her painful lack of reach. Yukon has to get close. Though opening fire at such short-ranges optimizes the performance of her AP shells, she often finds herself as the easiest (if not the closest) target for the Red Team. Fighting in these kind of situations tends to go poorly for Yukon if she cannot cripple her opponent with her opening salvo. She does not have the armor or the rate of fire to come out the better in such trades. The best practice is to perform hit and run tactics, putting out a few salvos and then going dark, pulling back to heal, recover, and reposition.

As a premium ship, Yukon has no module upgrade to research.

Yukon benefits most from survivability upgrades. Like most battleships, look to improve the efficiency of her fire resistance.

The recommended upgrades for Yukon:

For the first 10 points, it's "pick'em" between Gun Feeder and Emergency Repair Specialist at Tier 1. Then Priority Target gets the nod over Grease the Gears if you don't have the Main Battery Modification 2

upgrade. At Tier 3, Basics of Survivability or Adrenaline Rush. At the four-point tier, where an Elite Commander will want all three 3-star skills, take Concealment Expert first.

As a premium ship, Yukon comes with Default permanent camouflage and a set of permanent combat bonuses.

Ships of Commonwealth
Battleships
Retrieved from "http://wiki.wargaming.net/en/index.php?title=Ship:Yukon&oldid=319678"
Categories:
Your location:
To log in, select the region where your account is registered
CIS Europe North America Asia
Or use Microsoft Login to enter WoT XBOX ecosystem
Log in