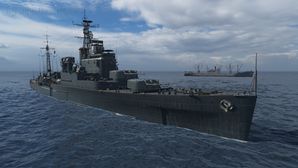 Mysore is more of a downgrade of tier VII Fiji but she can still be a powerful ship. She only fires AP shells but they have smaller chances of over-penetrating and ricocheting unlike other cruiser AP shells but only 9 can be fired in a salvo compare to Fiji 's 12. She also comes with Repair Party

to help her last longer in battles. Like Perth she can use the Crawling Smoke Generator

As a premium ship, Mysore has no module upgrades to research.

The recommended upgrades for Mysore are:

As a premium ship, Mysore comes with Default permanent camouflage and a set of permanent combat bonuses.

Ships of Commonwealth
Cruisers
Retrieved from "http://wiki.wargaming.net/en/index.php?title=Ship:Mysore&oldid=319489"
Categories:
Your location:
To log in, select the region where your account is registered
CIS Europe North America Asia
Or use Microsoft Login to enter WoT XBOX ecosystem
Log in