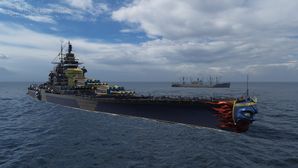 Wujing is a former celestial General who was banished to the mortal realm and turned into a man-eating demon for breaking a precious vase in the palace. Later on, he managed to atone for his guilt, acquire a human name again, and became a monk.

As a premium ship, Wujing doesn't have any upgrades to research.

The recommended upgrades for Wujing are as follows:

As a premium ship, Wujing comes with Default permanent camouflage and a set of permanent combat bonuses.

Ships of Pan-Asia
Battleships
Retrieved from "http://wiki.wargaming.net/en/index.php?title=Ship:Wujing&oldid=325463"
Categories:
Your location:
To log in, select the region where your account is registered
CIS Europe North America Asia
Or use Microsoft Login to enter WoT XBOX ecosystem
Log in