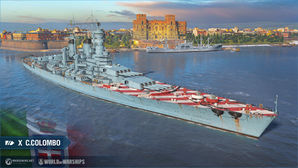 A large battleship that embodies the Italian shipbuilding achievements of the early 1940s. The ship carried sixteen 381 mm main guns and a strong secondary battery.

As the Tier X battleship, Cristoforo Colombo is the culmination of the Italian battleship line. Similar to Montana, Cristoforo Colombo gains an extra turret over her Tier IX predecessor, Lepanto. As a result, her main strength lies in her sixteen (16) 15-inch main battery guns. However, she has an extremely low base range for a Tier X battleship at 18.91 kilometers - nearly two kilometers shorter than Grosser Kurfurst 20.6 kilometer range. Therefore, she excels at punishing broadside targets at close to medium range, but lacks the ability to trade at range with her peers. Overall, captains will find Cristoforo Colombo’s adept playstyle to be incredibly unique.

Cristoforo Colombo’s defining characteristic is her extensive main battery suite. With sixteen (16) 15-inch main battery guns, Cristoforo Colombo currently holds the title to the highest broadside weight in the game, marginally beating out Vermont’s twelve (12) 18-inch main gun battery. Like her predecessors, she has unique access to semi-armor piercing shells in place of high explosive. As a tradeoff, her standard armor-piercing ammunition has very low penetration in comparison to her peers. Despite this, her armor-piercing shells are more than enough to deal significant damage to broadside cruisers and deal substantial damage to battleships and destroyers alike due to the sheer volume of fire. In addition, she has a -30% shell swapping bonus built into her, like the rest of the line.

However, Cristoforo Colombo’s main battery falls short in its ability to overmatch more than 26mm of armor with AP shells, being only 15 inches in diameter. As a result, Cristoforo Colombo encounters situations where she is unable to deal significant damage with AP to some Tier X cruisers when angled properly. However, this downside is partially alleviated due to the fact that Cristoforo Colombo has access to SAP, allowing her to still reliably deal damage to all Tier X cruisers unless they are perfectly angled. Additionally, her guns are relatively imprecise; the main battery has the standard battleship dispersion formula and only 1.5 sigma.

At a max speed of 29.6 knots and a base rudder shift time of 18 seconds, Cristoforo Colombo’s maneuverability is about average for a Tier X battleship. However, she also gains access to the special Exhaust Smoke Generator

consumable, allowing her to create smoke cover that can keep pace with her even at max speed for a base duration of 45 seconds. As a result, Cristoforo Colombo is able to turn out from imminent danger so long as captains are careful not to fire her main battery, as she is detected from 16.7 kilometers while firing in smoke. In addition, despite having only 89,900 hit points, Cristoforo Colombo can shrug off much damage owing to a fantastic armor scheme. With a 70mm upper belt and fully submerged citadel compartment, she is incredibly difficult to punish even when broadside and mitigates a significant amount of incoming damage when properly angled to the enemy.

As a whole, Cristoforo Colombo captains will find her flexible gameplay very enjoyable. Playing optimally, captains will have to switch between SAP and AP to whittle down targets with SAP and punish broadside cruisers and battleships with AP. Overall, the ship is very forgiving due to its excellent armor scheme and access to Exhaust Smoke Generator

As a Tier X ship, Cristoforo Colombo has no module upgrades to research.

The recommended upgrades for Cristoforo Colombo are as follows:

Ships of Italy
Battleships
Retrieved from "http://wiki.wargaming.net/en/index.php?title=Ship:Cristoforo_Colombo&oldid=322469"
Categories:
Your location:
To log in, select the region where your account is registered
CIS Europe North America Asia
Or use Microsoft Login to enter WoT XBOX ecosystem
Log in