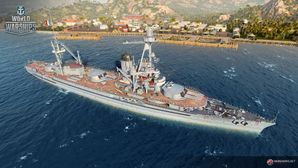 The first French battleship design with the main battery guns placed in three quadruple gun turrets. The construction of such turrets was driven by the desire to achieve maximum broadside firepower given the ship's limited size.

As one of the fastest Tier VI battleships — aside from Dunkerque and Repulse — captains could be forgiven for considering Normandie a battlecruiser. She is arguably a better version of her premium counterpart Dunkerque, owing to her smaller profile, an extra main battery turret, better firing range, and better dispersion. She can easily chase down any retreating battleship and or cruiser ruthlessly, and give torpedo-based destroyers a hard run for their money. However, she is not without her own demerits.

Although Normandie is very fast and has firepower on par with her Tier VI counterparts, she also poorly armored. Her armor scheme is similar to British counterpart Queen Elizabeth: a thickly armored exterior with a somewhat poorly armored citadel, making long range engagements potentially disastrous, especially when facing off against large caliber guns (380mm and up) such as those of the aforementioned Queen Elizabeth or even Tier VII American battleship Colorado.

In addition to her somewhat weak armor, she also has very poor firing angles for all her turrets; she must expose a tremendous amount of her broadside armor just to able to fire the rearmost turret. However, Normandie’s fast rudder shift easily makes up for this handicap, and captains who time their shots well can return to being angled towards their targets after firing a full salvo. In addition to her great rudder shift, Normandie’s turning radius is excellent for her speed, on par with the USN New Mexico. Furthermore, her deadly array of secondary batteries can make quick work of enemy destroyers that venture too close—should captains invest in the relevant upgrades and commander skills for a secondary build, they are almost as deadly as Bayern’s. Unfortunately, her anti-aircraft suite is virtually useless, with even the notoriously AA-light Fuso sporting more capable flak.

In short, Normandie is a moderately-armored battlecruiser with great speed, main batteries, and maneuverability, but with below average armor and worst-in-tier anti-aircraft firepower. Her speed and handling somewhat make up for her lack of armor, but captains must learn not to always rely on her speed for everything.

Availability of researchable upgrades for Normandie is as follows:

Early experience gains should go to Hull (B) for the additional hit points. After that, captains should decide which they value more: the extra speed or additional main battery range.

The recommended upgrades for Normandie are as follows:

(the latter is recommended).

Normandie can equip the following consumables: 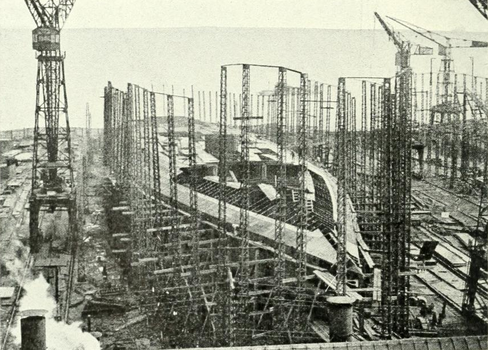 The Normandie class of dreadnought battleships was a group of five ships ordered for the French Navy in 1912–13. The class comprised Normandie, the lead ship, Flandre, Gascogne, Languedoc, and Béarn. The design incorporated a radical arrangement for the twelve 340 mm (13.3 in) main battery guns: three quadruple gun turrets, as opposed to the twin turrets used by most other navies. The first four ships were also equipped with an unusual hybrid propulsion system that used both steam turbine and triple expansion engines to increase fuel efficiency.

Ordered on 12 December 1912, this project was developed using Bretagne as a basis; it would be the first time in history to mount the main guns in quadruple turrets (by pairs in two gun slides, each one weighing 1,500 t), electrically trained and hydraulically elevated. Each pair of guns had its own ammunition hoist and magazine, and hosted secondary gunnery control stations. The guns would have a firing range of 16km and a rate of fire of two rounds per minute. Five range-finders (two on the conning tower, three atop each turret) provided fire control for the main batteries. The secondary battery would consist of twenty-four 138.6 mm /55 Modèle 1910 guns, each singly mounted in casemates in the hull. The four-shaft machinery included would utilize the VTEs for cruising.

The ships, named after provinces of France, were never completed due to shifting production requirements after the outbreak of war in 1914. Normandie was never commissioned let alone saw combat. Construction came to a halt in January 1918, with Normandie’s hull 65 percent complete, her engines 70 percent complete, the turrets were 40 percent assembled, and her boilers delivered but were instead installed in new destroyers. The first four ships were sufficiently advanced in construction to permit their launching to clear the shipyards for other, more important work. Many of the guns built for the ships were instead converted for use by the Army. After the war, the French Navy considered several proposals to complete the ships, either as originally designed or modernized to account for lessons from the war. The weak French post-war economy coupled with the Washington Naval Treaty of 1922, however, necessitated that the first four ships be broken up for scrap.

The last ship, Béarn, though not significantly advanced at the time work halted, was converted into an aircraft carrier in the 1920s. She remained in service in various capacities until the 1960s, and was ultimately scrapped in 1967.

Ships of France
Battleships
Retrieved from "http://wiki.wargaming.net/en/index.php?title=Ship:Normandie&oldid=318473"
Categories:
Your location:
To log in, select the region where your account is registered
CIS Europe North America Asia
Or use Microsoft Login to enter WoT XBOX ecosystem
Log in