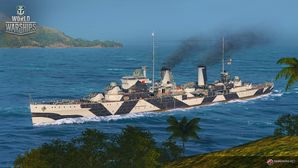 This warship was built in the United Kingdom, based on a reworked design of Leander-class cruisers with a modified arrangement of the propulsion unit. She was similar to her prototype in terms of armament but had a different armor layout. In 1939, the ship was commissioned into the Royal Australian Navy.

Perth is a sister ship to Tier VI British cruiser Leander; however, she has some significant differences. Most notably, she carries a high explosive round — like Belfast — allowing her to set enemies on fire with something other than secondaries. Her other primary difference is her smokescreen. Unlike the short deployment time, long-duration typical British cruiser smoke, Perth has a Crawling Smoke Generator

that deploys smoke continuously for 90 seconds, but each individual cloud of smoke only lasts for 10. This allows Perth to create a mobile smoke screen, staying fully hidden while moving at speeds up to 12.5 knots, for over 2 minutes with all available modifications.

In the negative column, Perth’s armor-piercing rounds are not the improved AP of the regular tech tree British light cruisers, and her anti-aircraft suite is even weaker than that of stock hull Leander. Her short main battery firing range also means she must be played very carefully, or she will be quickly removed from the battle by anything that can citadel her, which is, unfortunately, anything in the game with cruiser-caliber guns or better. When her short firing range is combined with her woefully mediocre anti-aircraft suite, Perth’s ability to equip either a Spotting Aircraft

or a Catapult Fighter

— something Leander can't do — becomes an important choice; either will give her some spotting ability outside of her smoke screen, but one will increase her range and the other will help cover her from enemy aircraft.

More than any other ship in the game, Perth benefits from access to the Special Upgrades that are available through the Arsenal. Captains with access to the following are encouraged to mount them instead in their respective slots: Smoke Generator Modification 1

will better align your Hydroacoustic search duration with your upgraded smoke duration.

Perth has more commander skill options available to her than Leander, simply by virtue of the fact she has high explosive shells available to her main battery. The two main specializations are towards DD-hunting or towards damage output.

For DD-hunters, taking Concealment Expert and Radio Location are critical, supplemented by quality of life skills.

For a more damage-oriented build, Pyrotechnician , Inertia Fuse for High Explosive, and Adrenalin Rush are core skills to chose.

As a premium ship, Perth comes with Default permanent camouflage and a set of permanent combat bonuses.

) are the most important signal flags that Perth can equip, followed by Sierra Mike (

) to eliminate the bonus chance of detonation is a good idea. Sierra Bravo may also be useful to boost Hydroacoustic Search 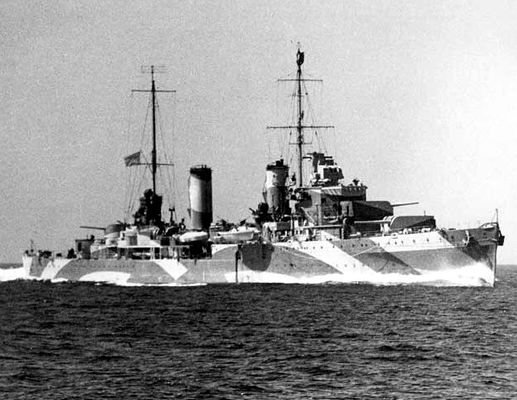 Ships of Commonwealth
Cruisers
Retrieved from "http://wiki.wargaming.net/en/index.php?title=Ship:Perth&oldid=319462"
Categories:
Your location:
To log in, select the region where your account is registered
CIS Europe North America Asia
Or use Microsoft Login to enter WoT XBOX ecosystem
Log in