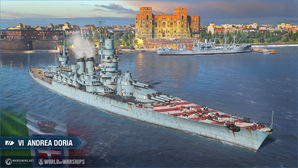 A project that evolved from the Conte di Cavour-class battleships, equipped with a reinforced secondary battery. In the 1930s, the ship received a significant upgrade when her anti-torpedo protection was reinforced, her speed was increased, and her main and secondary battery guns were made more powerful.

The recommended upgrades for Andrea Doria are as follows:

Ships of Italy
Battleships
Retrieved from "http://wiki.wargaming.net/en/index.php?title=Ship:Andrea_Doria&oldid=322474"
Categories:
Your location:
To log in, select the region where your account is registered
CIS Europe North America Asia
Or use Microsoft Login to enter WoT XBOX ecosystem
Log in