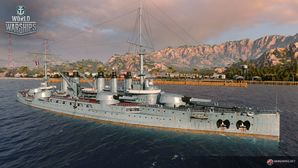 A version of the first French battleship design that adopted unified main battery guns. It was the development of the last French battleship-dreadnoughts that featured a characteristic and recognizable profile and diamond-shaped arrangement of guns.

Turenne plays and handles very similarly to her Tier III contemporaries, Nassau and Kawachi. Like most other low tier battleships, Turenne travels at a slow pace, requiring captains to plan their moves ahead of time. Additionally, the ship boasts a thick main and upper armor belt that can easily protect against enemy fire with the proper angle.

Like Nassau and Kawachi, Turenne carries her primary guns in a hexagonal arrangement. While this prevents all guns from being fired simultaneously, it allows for captains to maintain firepower on both sides of the ship. The wide firing angles of the rear turrets allow captains to make use of a majority of the ship’s firepower while keeping a narrow profile towards the enemy. However, captains should make note of their shell and target selection prior to firing. Turenne’s armor piercing shells have a low initial velocity and often struggle to deal effective damage against distant ships. Instead, captains may find high explosive shells to be more effective, especially at heavily angled or far-away targets.

While Turenne's armor is not the thickest at her tier, it can protect the ship’s citadel from enemy fire, given the proper angle. The extended main belt and large upper belt also limit the areas on the ship that are vulnerable to enemy high explosive shells. Captains should make use of the ship’s armor, wide firing angles, and small turning circle to quickly fire before angling the ship against returning shells.

In short, Turenne is very similar to other Tier III battleships in numerous ways. Like other dreadnoughts, she trades speed for better armor and bigger guns. However, captains may often find themselves switching shell types or targets due to the low penetration of the armor piercing shells.

Availability of researchable upgrades for Turenne is as follows:

Captains should first research Hull (B) before researching the Gun Fire Control System and Propulsion upgrades.

The recommended upgrades for Turenne are as follows:

Turenne can equip the following consumables:

) flags can be mounted to improve the effectiveness of the ship's consumables. India Yankee ( 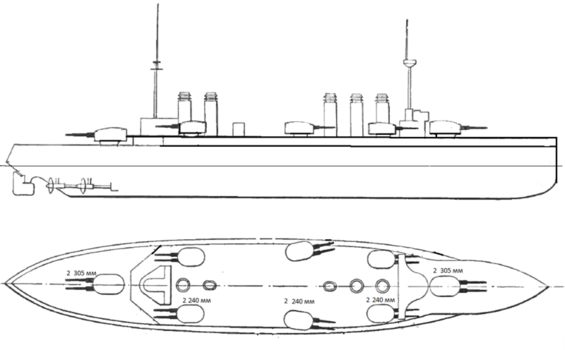 Ships of France
Battleships
Retrieved from "http://wiki.wargaming.net/en/index.php?title=Ship:Turenne&oldid=324542"
Categories:
Your location:
To log in, select the region where your account is registered
CIS Europe North America Asia
Or use Microsoft Login to enter WoT XBOX ecosystem
Log in