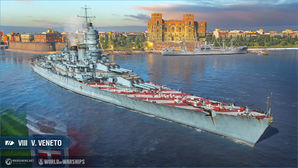 A series of new-generation Italian battleships. They stood out by having good anti-torpedo protection and, at the time of their entry into service, being among the fastest battleships in the world.

Vittorio Veneto features a great armor scheme for her tier. Her 45 mm deck protects against most HE shells, with most cruisers and destroyers struggling to deal damage. Her 375 mm armored belt, coupled with an 130 mm extended belt, gives her solid protection up to and including battleship-caliber AP shells when angled. In addition, she also has one of the best torpedo belts at tier VIII, with a torpedo damage reduction of 38.5%.

Her maneuverability is above-average for her tier, with a 30 knot top speed and a good turning circle of 810 meters, coupled with a 15.7 second rudder shift time. Her concealment is also respectable, with 12.8 km detection fully specced. This gives Veneto a better ability at repositioning, as well as effortlessly angle between her salvos to minimize damage.

Vittorio Veneto sports nine 381 mm guns, in a three-by-three layout, with great ballistics and shell velocity, making aiming relatively comfortable for captains. As with the rest of the line, she has access to a -30% time to swap between her shells, without any modifiers. Of the ship's SAP and AP shells, captains should generally prefer the former, as they feature high damage, high penetration, and improved ricochet angles. As with most SAP shells, captains should aim for battleship and cruiser superstructures, as her SAP overmatches these sections and deals large chunks of damage with each salvo. Her gun caliber means she is limited in overmatching only up to 26 mm plating, meaning she struggles to deal with high tier cruisers’ bows, sterns and midsections, as she cannot overmatch them. In addition, her battleship-caliber SAP is capped at 10% maximum damage against destroyers, which limits the ship's effectiveness against that class. Vittorio Veneto’s AP is also superb, with high penetration, and should be used against broadside targets. Because of the situational nature of each shell type, the Gun Feeder captain skill is a must, especially considering it stacks with her default -30% shell-swapping bonus. Hampering her main battery performance is a long reload, inconsistent accuracy, and short gun range, leading to often frustrating salvos. Captains can expect to wait grueling seconds only to watch well-aimed salvos miss enemy ships.

Vittorio Veneto’s secondary battery, while boasting a high rate of fire, consists mostly of 90 mm guns. These have poor penetration, and cannot even penetrate destroyers. Thus, a secondary build is inadvisable. Her AA is also poor, with a short range of 4.6 km and middling DPS values. As with most ships, stick close to allies if enemy aviation poses a serious threat.

consumable, allowing her to go undetected for extended periods of time. The consumable is mostly a defensive tool as a means of disengaging from fights, or alternatively sneaking up on enemy ships undetected. Firing from inside the smoke screen isn’t recommended, as Veneto has a high smoke firing penalty. In addition, she gains access to Spotting Aircraft

. The Spotter Aircraft is preferred as it allows her to extend her gun range.

The optimal combat range for Vittorio Veneto is midrange, around 12-15 km. This helps alleviate some of her main battery’s downsides, namely the poor accuracy. Her armor and great firing angles allow her to do well at this range. Her Exhaust Smoke Generator

allows her to disengage from incoming fire and reposition, or close the distance on enemy ships while remaining undetected.

Vittorio Veneto is a polarizing ship. On one hand, her SAP features potentially devastating alpha damage, and her hull has solid armor, maneuverability, and concealment. On the other hand, her main battery’s downsides severely limit her potential, and can be aggravating to captains: her salvos will either bring satisfaction or frustration. She is a rather difficult ship to play, and even the best captains will be caught off-guard by her limits.

Availability of researchable upgrades for Vittorio Veneto is as follows:

As Vittorio Veneto has short gun range, captains are encouraged to prioritize her Gun Fire Control System to improve her range. The hull can then come next, giving a boost in survivability and improving her rudder shift and AA defenses.

The recommended upgrades for Vittorio Veneto are as follows:

Ships of Italy
Battleships
Retrieved from "http://wiki.wargaming.net/en/index.php?title=Ship:Vittorio_Veneto&oldid=322471"
Categories:
Your location:
To log in, select the region where your account is registered
CIS Europe North America Asia
Or use Microsoft Login to enter WoT XBOX ecosystem
Log in