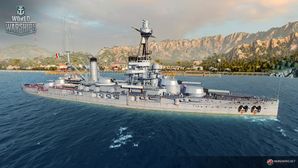 A series of French battleships built in response to the appearance of British "superdreadnoughts". These ships were developed directly from the ships of the preceding class but carried 340 mm guns arranged under a more rational scheme.

Tier V's Bretagne is like most other battleships at her tier in her turret layout and general firepower. She does not introduce anything revolutionary armor and protection wise, nor does she break any speed records. Any veteran New York or Texas player should be familiar with the play style needed to do well in Bretagne, though there are some key differences.

Bretagne introduces players to the staple 340mm guns found on the next two ships in the French battleship line, though in two gun mounts rather than the distinctive quads. This makes the transition down the line quite comfortable (at least, until reaching Richelieu and her 380mm guns). As far as Bretagne’s place at Tier V, she fits well among most other battleships. Her top speed of 21 knots isn't anything remarkable, and veterans of the American battleship line will likely have painful flashbacks of how it feels playing a ship so slow. Certainly, being able to plan ahead will aid any Bretagne player greatly, as it takes too long to re-position otherwise. Thankfully, 18.1 km of range makes the low speed somewhat more comfortable, and allows for greater map presence with her guns.

For a Tier V ship, Bretagne’s armor is not bad. It certainly holds it's own against equal tiered opponents, and her belt armor even extends up to the the bow of the ship, just above the waterline. Other than that strip of belt armor, she has the usual 19mm plates vulnerable to overmatch by any other battleships, so take care when fighting others.

Availability of researchable upgrades for Bretagne is as follows:

For Bretagne, research her Gun Fire Control System first, to give a boost to her in game presence and a buffer against higher tiered ships. Then, get her upgraded Engine next, for that ludicrously fast 21 knot top speed. Finally, grab the upgraded Hull for the health.

The recommended upgrades for Bretagne are as follows:

Key skills for Bretagne commanders include those that increase her survivability, and make her gunnery more comfortable.

Bretagne can equip the following consumables:

Bretagne was a battleship of the French Navy built in the 1910s, and the lead ship of her class; she had two sister ships, Provence and Lorraine. The ship was laid down in July 1912 at the Arsenal de Brest, launched in April 1913, and commissioned into the fleet in February 1916, after the outbreak of World War I. She was named in honour of the French region of Brittany, and was armed with a main battery of ten 340 mm (13 in) guns.

Bretagne spent the bulk of her career in the French Mediterranean Squadron. During World War I, she was stationed at Corfu to prevent the Austro-Hungarian fleet from leaving the Adriatic Sea, but she saw no action. She remained in service during the 1920s and 1930s, while her sisters were placed in reserve. She participated in non-intervention patrols during the Spanish Civil War. Bretagne escorted convoys after the outbreak of World War II in September 1939, and was stationed in Mers-el-Kébir when France surrendered on 22 June 1940. Fearful that the Germans would seize the French Navy, the British Royal Navy attacked the ships at Mers-el-Kébir; in the attack Bretagne was hit badly and exploded, killing the majority of her crew. The wreck was eventually raised in 1952 and broken up for scrap.

Ships of France
Battleships
Retrieved from "http://wiki.wargaming.net/en/index.php?title=Ship:Bretagne&oldid=319842"
Categories:
Your location:
To log in, select the region where your account is registered
CIS Europe North America Asia
Or use Microsoft Login to enter WoT XBOX ecosystem
Log in