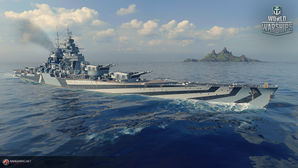 A battleship design developed in France in response to construction of the German "H"-class battleships. The ship was a development of the Richelieu class, but in contrast to her predecessor, she had more powerful artillery that was arranged according to a more reasonable scheme. One of the design versions received twelve 380mm guns that were placed in three main turrets.

Bourgogne was first released for sale on 01 December 2018 and is available in the Armory for Steel.

Bourgogne, much like the other French reward premium Jean Bart, is an up-tiered and upgraded version of her tech tree counterpart. Captains familiar with the play style of Alsace will have absolutely no problem adapting to Bourgogne.

Sharing the same set of twelve 380 mm guns found on Alsace, Bourgogne has the smallest size guns of all Tier X battleships. Captains familiar with the overmatch mechanics will realize that this makes Bourgogne the only Tier X battleship to be unable to overmatch the bow and stern armor of the high-tier American and German cruisers. That being said, her combination of amazing rate of fire, strong HE and AP and the presence of the Main Battery Reload Booster

consumable will easily allow captains to severely punish any enemy vessel that fails to angle properly against her. If needed, her rate of fire also allows for use of high-explosive ammunition. As far as secondaries are concerned, she differs slightly from Alsace in that she has the same 8x2 127mm setup found on République, instead of the 12x2 100mm guns on Alsace. The larger shell size allows for the penetration of the secondaries to cross the infamous 19mm armor threshold, making her secondary suite quite a bit more useful than that of her sister, though it is still ill-advised to go for a secondary build like on all French battleships due to the inaccuracy of the secondaries and the poor HE protection of French Battleships.

As far as protection goes, she has the same armor scheme found on that of all other high-tier French battleships. A relatively well-protected citadel generally keeps her safe from receiving massive hits from enemy battleships, but captains should be aware that it isn't nearly as well protected as that of the German battleships, so taking citadel penetrations when full broadside is absolutely possible. Like the other French battleships, she is covered in 32mm plating, making her extremely vulnerable to cruiser high-explosive shells, as well as overmatch from the 460mm guns found on Musashi and Yamato, the 480mm guns found on Hannover, the 508mm guns found on Incomparable and the 510mm guns on Shikishima and Satsuma. Furthermore, her turrets are quite weakly armored, especially on the sides and rear, so captains can expect to suffer turret incapacitations — and even fully destroyed turrets — with depressing regularity. Having the second smallest health pool of all Tier X battleships combined with the weakness of her 32mm armor, the result is Bourgogne is quite vulnerable to focus fire from the enemy team and is relegated to a fire-support role.

Bourgogne’s mobility is a completely different story. With a top speed of 32 knots, she's already the fastest of the Tier X battleships; mount the Sierra Mike (

consumable, and Bourgogne can reach a whopping 38.6 knots. Use this mobility to dictate the terms of engagement. Whether it's re-positioning to a falling flank, creating a crossfire on a high-value enemy target, or quickly disengaging from an unfavorable situation, Bourgogne's mobility is one of her most powerful assets. Whereas other battleships act as floating bunkers, Bourgogne's play style is more like that of a cruiser. Knowing when and how to create crossfires is a necessary skill to make Bourgogne perform at her best.

As a premium ship, Bourgogne has no module upgrades to research.

Both of the Honore brothers are highly recommended due to their improved Grease the Gears and Adrenaline Rush.

Bourgogne can equip the following consumables:

As a premium ship, Bourgogne comes with Default permanent camouflage and a set of permanent combat bonuses. 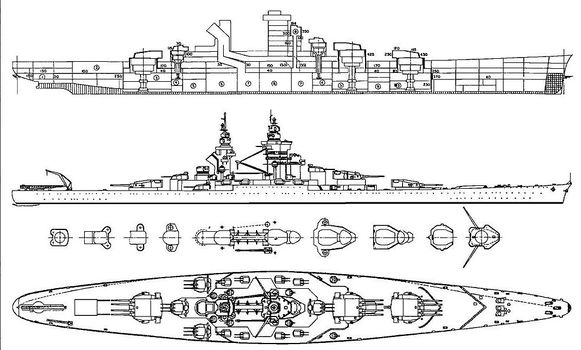 During late 1939, studies were being drawn up for capital ships displacing 40,000 tons or greater to counter the German H-class battleships. Three studies were drawn up of a 40,000 ton, 42,500 ton and 45,000 ton battleships, alongside studies of 400mm, 406mm, and 420mm naval guns. To undertake the construction of a new generation of battleships even greater than the Richelieu class, would have required a major program to develop and expand existing dockyards to be able to accommodate a ship of such a size. Early plans envisaged a dock 275 meters long and 58 meters wide, to be capable of accommodating the new generation of battleships that came to be the Alsace class, whose first form was slated to be 252 meters long and 35 meters wide. Bourgogne was the name to be given to the fourth vessel of this class before the ships ordered were cut down from four to two.

Of the three competing designs, the main focal point was the main armament. Type No. 1, the 40,000 ton design, was an upscaling of the Project C3 design that came out of the studies for the latter two Richelieu-class battleships Gascogne and Clemenceau. Type No. 1 was to carry nine 380mm guns in three triple turrets, laid out in the contemporary AB-X style, with a secondary armament of nine 152mm guns in three triple turrets, and sixteen 100mm dual-purpose guns in eight dual turrets. It was designed to be capable of a top speed of 31 knots to keep pace with other French capital ships, with 170,000 shaft horsepower to propel her to this speed. Type No. 1 was the most realistic and achievable design, but it may not have been enough to counter the German H-class battleships, which were to be armed with 406mm guns.

Type No. 2 was a direct step up from Type No. 1, designed to carry nine new 406mm guns in the same layout as Type No. 1. Displacing 42,500 tons, Type No.2 was four meters longer than Type No. 1, and required an additional 20,000 shaft horsepower to maintain the top speed of 31 knots, bringing her total horsepower up to 190,000. Type No. 2 would have carried the largest guns in the Marine Nationale, but this would have been a problem, as it would have introduced a fourth gun caliber to the fleet (alongside Richelieu’s 380mm, Dunkerque’s 330mm, and Bretagne’s 340mm), while the other powerful navies — bar the Royal Navy — only had two calibers. Furthermore, the 406mm gun’s own development program would have inevitably delayed the construction of these new battleships, and early estimates showed that Alsace would not be completed until 1946.

Type No. 3 — the largest and most powerful study — was the largest complete ship study of the Marine Nationale. Displacing 45,000 tons, Type No. 3 reverted back to the 380mm guns, instead carrying twelve of them in three quadruple turrets, in the same turret design as the preceding Richelieus. Type No. 3’s AA suite was substantially improved, with the four additional dual-barreled 100mm dual-purpose gun turrets, and an increased number of 37mm AA guns. Type No. 3 was thirteen meters longer than the original Type No. 1 design, had a belt 20mm thicker, and was designed to be capable of outputting 220,000 shaft horsepower so the ship could reach 32 knots. While Type No. 3 had a wide range of benefits and outclassed almost all (known) current foreign battleships, the design was simply too large for the current French infrastructure and shipyards to handle.

The Naval General Staff’s choice was relatively straightforward. Type No. 2’s 406mm guns would take too long to properly develop, and Type No. 3 was simply too large to construct as of the moment and would require lengthy and expensive government investment in the shipyards. Type No. 1 was chosen, as it was regarded as a well-balanced design which used mostly existing weaponry and could be built with relatively minor adjustments and improvements to the French shipyards and infrastructure. Two battleships of the Type No. 1 design were approved on 1 April 1940. The first, named Alsace, was to be laid down at the Penhoët No. 1 slipway following the launch of aircraft carrier Joffre in 1941. However, following the collapse of the French Army in June 1940, all capital ship construction plans were scrapped, and the two ships of the Alsace-class ultimately never made it to the shipyards.

Ships of France
Battleships
Retrieved from "http://wiki.wargaming.net/en/index.php?title=Ship:Bourgogne&oldid=319468"
Categories:
Your location:
To log in, select the region where your account is registered
CIS Europe North America Asia
Or use Microsoft Login to enter WoT XBOX ecosystem
Log in