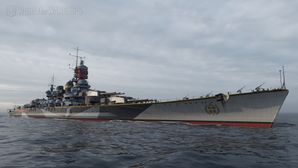 The second Vittorio Veneto-class warship to be built, and one of the most powerful battleships in the Mediterranean. From the Azur Lane game.

AL Littorio first was released for sale on 24 July 2020 as part of the Azur Lane: Third Wave event. With the Fourth Wave event going live in update 11.4, she was available for 14,300 doubloons. She has not been available since.

Stats-wise, AL Littorio is a direct copy of Roma, currently the only other premium Tier VIII Italian battleship. As such, all advice that applies to Roma also applies to AL Littorio: she is fast, stealthy and has good shell velocities (though only mediocre accuracy.) While her guns have excellent penetration values for her tier, it's worth knowing that this also means shells will tend to over-penetrate more lightly-armored targets for minimal damage. AL Littorio's AA is limited primarily by it's extremely short range (4.6km), so stick near your team if you fear being picked on by enemy aircraft. Her armor scheme is overall very solid given her speed, though players should avoid showing broadside too often as her raised citadel can quickly catch massive damage.

Played to her strengths, AL Littorio excels at initiating duels against other battleships and even some cruisers, and can just as easily use her speed and stealth to disengage if needed. Particularly in matches without aircraft carriers, AL Littorio's advantages only become more valuable as a game progresses.

As a premium ship, AL Littorio doesn't have any upgrades to research.

The recommended upgrades for AL Littorio are as follows:

As a premium ship, AL Littorio comes with Default permanent camouflage and a set of permanent combat bonuses.

Ships of Italy
Battleships
Retrieved from "http://wiki.wargaming.net/en/index.php?title=Ship:AL_Littorio&oldid=320049"
Categories:
Your location:
To log in, select the region where your account is registered
CIS Europe North America Asia
Or use Microsoft Login to enter WoT XBOX ecosystem
Log in