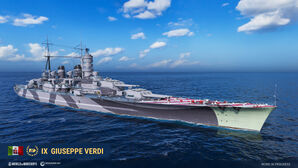 A variant of a battleship that was designed in Italy in the mid-1930s. A further development of the Vittorio Veneto-class warships, equipped with 406 mm main battery guns.

Giuseppe Verdi was first released for sale on 22 December 2021.

Premium Tier IX Italian battleship Giuseppe Verdi shares many common traits with her premium sibling IX Marco Polo, including identical hulls and armor, as well as similar main guns. However, they each share different traits of the tech tree line, particularly their consumables and ammunition. While Marco Polo sacrifices the Exhaust Smoke Generator

Giuseppe Verdi is armed with nine (9) 406mm guns in three (3) triple turrets. She uses the same turrets as found on IX Marco Polo, but her ammunition and main battery performance differ significantly. Compared to Marco Polo and the tech tree Italian battleships, Giuseppe Verdi's most notable difference is her HE main battery shells. While it lacks the damage potential of SAP shells on other battleships, has some significant advantages — in addition to setting fires and breaking modules, she can deal more consistent damage against sharply angled targets. Most importantly, it doesn’t share the 10% damage cap against destroyers that AP and SAP have, allowing her to defend herself against destroyers. Giuseppe Verdi's AP rounds have similar ballistics to those found on Marco Polo, but they have slightly higher penetration at the expense of lower damage. Against thinly armored targets, that higher penetration can often result in overpenetrations for little damage.

Her reload is on the slower side of average for a Tier IX battleship, but still better than her Italian counterparts, and her turret traverse is decently fast for the tier. However, her firing range is one of the shortest, barely exceeding 19km. Additionally, her main battery accuracy leaves much to be desired. She uses the Italian/French battleship dispersion rather than the “standard” dispersion used on most other battleships, and her sigma is below average as well — only 1.7. When her shells hit and penetrate, they’ll hurt; but the relative inaccuracy can often result in shells landing nowhere near the target.

Giuseppe Verdi's secondary suite is identical to Marco Polo’s, mostly consisting of twin 90mm mounts with a pair of triple 152mm turrets on each side. However, unlike the tech tree battleships and Marco Polo, Giuseppe Verdi has SAP secondaries. As with other SAP shells, they are less effective against bow-in targets, but have increased penetration and damage compared to same-caliber HE shells. They also have improved ricochet angles, with the 152s able to penetrate up to an 85° angle. That increased penetration is especially helpful against destroyers, as it allows her to directly damage them rather than shattering most of her shells and relying on fires.

When fully built for them, Giuseppe Verdi's secondaries can reach out to 10.5km with a fast reload on the smaller caliber turrets. Unlike other secondary focused battleships, Giuseppe Verdi does not have any sort of improved dispersion, but the higher rate of fire and increased penetration mean they will still deal a fair amount of damage.

Giuseppe Verdi's consumable suite is nearly identical to her tech tree counterparts. In addition to the standard Repair Party

consumables, she has the Italian Exhaust Smoke Generator

and a choice between a Catapult Fighter

. Her smoke generator features a longer action and dispersion time, as well as a wider radius, compared to the tech tree version.

As with the tech tree battleships and cruisers, the smoke generator can conceal her even at full speed. It can be used offensively, allowing her secondaries to fire while the ship remains undetected, as well as defensively, allowing her to turn and disengage without exposing her vulnerable side. However, her smoke firing penalty is huge, so firing her main battery while in smoke will almost always get her detected.

For a battleship of her size, Giuseppe Verdi is surprisingly agile. She is one of the fastest battleships for her tier, with a below average turning circle and fast rudder shift. While she can’t outrun most of the cruisers she’ll face, she has the speed to choose some of her battleship-on-battleship engagements and respond quickly to changes in the battle over time.

Although her main battery firing angles are average, her smaller turning circle and fast rudder shift allow her to play a little like VIII Vanguard, turning out to get her rear turret on target and then angling back before the return fire arrives.

Giuseppe Verdi shares the same armor protection as Marco Polo, with respectable belt and deck armor and a slightly sloped turtleback protecting her citadel. However, the lower section of the turtleback is only 25mm thick and can be overmatched by almost all battleships in her matchmaking range. As long as they have enough penetration to get through her main belt, she will easily take citadel damage. She also has a small section of 130mm plating extending just in front of her main belt, but the remainder of her bow and all of her stern are only 32mm thick. Although it offers protection against most battleships she can face, it’s vulnerable to almost all cruiser HE as well as overmatch from 460mm+ battleship AP.

Despite having decent armor, Giuseppe Verdi has one of the lowest HP pools among Tier IX battleships. Along with other low health battleships, Giuseppe Verdi prefers to avoid taking fire, either through positioning and intelligent use of cover or by using her smoke screen to remain undetected. When not concealing herself within a smoke screen, Giuseppe Verdi’s concealment is average at best among her peers.

While her torpedo protection is technically average for the tier, it doesn’t offer much in the way of damage reduction. Giuseppe Verdi relies on her agility to dodge incoming torpedoes and conserve her limited health pool.

Giuseppe Verdi's anti-aircraft defenses are poor at best. Her long-range guns have the shortest reach of all Tier IX battleships, although their continuous damage is among the best, and her mid- and short-range defenses are rather weak. Her mid range continuous damage is actually worst in tier, tied with Marco Polo. Her long range mounts produce a lot of flak clouds, but each deals substantially less damage than other battleship flak. If planes get caught in her flak, she will likely kill at least a few, but she can do little to deter strikes from experienced carrier players.

to boost her defenses, but it still won’t be enough to completely protect herself against strikes.

Like Marco Polo, Giuseppe Verdi offers a different take on the Italian battleship play style. But unlike many other Italian ships that tend to favor either longer or shorter ranges, Giuseppe Verdi is split between the two. Her secondaries, poor main battery accuracy, and exhaust smoke suit closer engagements, but her low health pool is a better fit for longer ranges.

Giuseppe Verdi's strongest defining feature is her secondary suite, and it offers a unique gameplay option when combined with her smoke screen. But she needs to pick her fights with care and avoid taking too much focus fire.

As a premium ship, Giuseppe Verdi has no module upgrades to research.

is recommended in slot 4 to reduce the amount of fire and flood damage she takes. For more experienced players, the faster rudder shift from Steering Gears Modification 1

may be more beneficial

As a premium ship, Giuseppe Verdi comes with Default permanent camouflage and a set of permanent combat bonuses.

Ships of Italy
Battleships
Retrieved from "http://wiki.wargaming.net/en/index.php?title=Ship:Giuseppe_Verdi&oldid=322135"
Categories:
Your location:
To log in, select the region where your account is registered
CIS Europe North America Asia
Or use Microsoft Login to enter WoT XBOX ecosystem
Log in