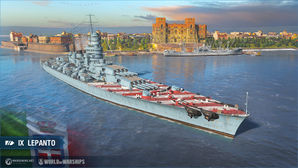 A further development of the Vittorio Veneto-class battleships, with her main battery guns placed in quadruple turrets.

Lepanto is the penultimate battleship in the Italian Battleship tech tree. Like the other Italian BBs, she distinguishes herself from other BBs with access to SAP ammo and exhaust smoke. SAP performs extremely well against cruisers and lightly armored BBs while her fuel smoke can hide her position for ~50 seconds, allowing her to run away from heavy opposition or to charge opponents while taking little damage.

Like other Italian Battleships, Lepanto performs best at medium ranges, roughly between 10-15km from her targets. This gives her the best balance of firepower and survivability; close enough to offset her main battery's poor accuracy, but far enough to escape fights if she is in danger of being overwhelmed. Light cruisers and lightly armored BBs are your main targets as SAP will usually deal heavy damage to them. AP rounds should be used on broadside targets that you can hit their citadel. Of course, always focus DDs when you have a shot as they are your most dangerous enemies. Her shells do not deal much damage, but 12 shells can still deal significant damage to any DD they hit. Choose your shots wisely as Lepanto has a very slow reload; make every salvo count!

gives Lepanto unique options that other BBs can only dream of. Most of the time, Lepanto will be using her smoke to disengage from fights. If caught bow into the enemy, she can deploy smoke before turning around, hiding her vulnerable broadside from preying BBs. This synergizes with her Damage Control Party

as the smoke protects her when the other consumables are on cooldown. As a result, Lepanto can play more aggressively than other BBs, knowing that the exhaust smoke always gives her an avenue of escape. Alternatively, smoke can be used to safely close the distance on an enemy. This works well when coordinated with other BBs as the enemy must choose to angle to you or your allies. Keep in mind the smoke will not hide you from enemy radar, hydro, or if you fire your main guns. Avoid shooting your main guns unless you think the potential damage dealt to a vulnerable ship is worth being detected.

Though Lepanto is a well-rounded BB, she still has some weaknesses. While her main guns are powerful, they are inconsistent due to their low sigma. Even perfectly aimed salvoes will occasionally miss, frustrating the player and potentially letting the target escape. Lack of HE for her main guns means Lepanto can't deal fire damage to other BBs aside from using her weak secondary guns. The front turrets also have a poor firing arc to the rear, making kiting more difficult to perform. Skilled enemy BBs can use this to their advantage to land citadel hits under Lepanto 's rear turret. Like other Italian BBs, she carries short range AA, inadequate for dealing with enemy carrier attacks. Lepanto must rely more on allied AA support or use a smoke to thwart CV attacks.

Other than her SAP and exhaust smoke, Lepanto behaves similarly to other BBs so typical BB tactics still apply. Angling to enemy threats, tanking damage for your team, and focusing fire on low HP targets also applies to her.

Overall, Lepanto is a solid Tier IX BB. Though her guns are inconsistent and have slow reloading, this is compensated by her hard-hitting SAP shells and 12 gun salvo. She can also prove one of the hardest BBs to kill due to her good armor, excellent torpedo protection, and access to exhaust smoke.

The recommended upgrades for Lepanto are as follows:

Lepanto can equip the following consumables:

Ships of Italy
Battleships
Retrieved from "http://wiki.wargaming.net/en/index.php?title=Ship:Lepanto&oldid=315245"
Categories:
Your location:
To log in, select the region where your account is registered
CIS Europe North America Asia Republic of Korea
Or use Microsoft Login to enter WoT XBOX ecosystem
Log in