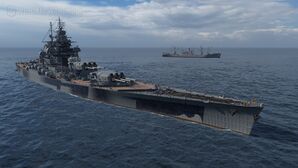 A variant of the Alsace-class battleship project with her main guns placed in triple turrets and differently arranged AA armament.

Flandre was first released for sale on at the end of March 2021.

Flandre is a Tier VIII French battleship based on Alsace.

As a premium ship, Flandre has no upgrades to research.

The straightforward shoot-and-survive build is optimal for Flandre for most captains. However, some may prefer a secondary build - quite fun in the right circumstances. Due to the poor forward gun angles of her secondaries, building them for brawling is not recommended.

The recommended upgrades for Flandre are:

if the captain is going for a secondary build.


In Slot 5, if the captain prefers to position well forward so that Concealment isn't an issue, then Torpedo Lookout System

may be the better choice.

As a premium ship, Flandre comes with Type 10 camouflage that lowers her detection radius, reduces the accuracy of incoming shells, reduces her service cost, and increases the amount of experience she earns.

Ships of France
Battleships
Retrieved from "http://wiki.wargaming.net/en/index.php?title=Ship:Flandre&oldid=313749"
Categories:
Your location:
To log in, select the region where your account is registered
CIS Europe North America Asia Republic of Korea
Or use Microsoft Login to enter WoT XBOX ecosystem
Log in