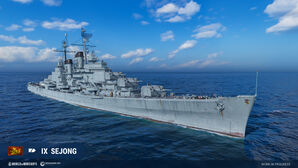 A variant of the light cruiser project developed in the United States during World War II, armed with 127 mm dual-purpose guns of a new generation.

At Tier IX, Sejong continues the HE and torpedo spam play style developed over the rest of the line. A variant of the American CL-154 project, Sejong shares many similarities with her American cousin X Austin and Pan Asian successor X Jinan, as well as other destroyer-caliber cruisers like VII Atlanta and Flint. Combining a fast-firing main battery and four heavy-hitting quadruple deepwater torpedo launchers with flexible Pan Asian smokescreens and a Torpedo Reload Booster, Sejong can stall capital ship pushes and quickly deal with destroyers that get too close.

Sejong is armed with twelve 127mm guns in six twin turrets, with similar characteristics to those found on Austin. But while Austin’s HE shells have similar stats, Sejong's lose speed more quickly due to higher drag, and thus have longer flight times and higher shell arcs. Her turret traverse and reload are among the fastest of any cruiser, but her small caliber limits the damage she can do to battleships and heavily armored cruisers. In those cases, she relies on superstructure hits and setting fires. Although her fire chance per shell is one of the lowest for Tier IX – only 9% – with twelve shells per salvo and a fast reload she can still set fires consistently. Sejong has AP shells, but their low penetration makes them ineffective at almost all ranges. In most situations, her HE shells will be the best choice. With her floaty shells, hitting longer range or agile targets can be a challenge. But her fast reload makes her a big threat to any destroyer that gets caught too close.

In addition to her main battery, Sejong carries two quadruple deepwater torpedo launchers per side. Like those found on the Pan Asian destroyer line, they have a low detection range but can’t hit destroyers. Sejong's are faster than those of any other Tier IX cruiser, with an excellent range as well as high damage and flood chance. They’re ideal for area denial or against isolated battleships and cruisers, as well as providing a painful deterrent against pushing ships if she has to run. With her torpedo reload booster, she can have up to 32 torpedoes in the water at the same time.

Sejong features the standard consumable suite for high tier Pan Asian cruisers. In addition to the normal cruiser Repair Party and Damage Control Party, she has access to the Defensive AA Fire consumable, a Smokescreen with a relatively short cooldown period, and the Torpedo Reload Booster consumable. Unlike most other high tier cruisers, Sejong does not have access to the Hydroacoustic Search consumable, leaving her more vulnerable to enemy torpedoes.

Sejong's smokescreen consumable is identical to those found on the preceding cruisers. Like the Pan Asian destroyer smoke generator, it has a good action time and average dispersion time, but the downtime between one smokescreen expiring and the next being available is just 40 seconds. However, Sejong only has three charges compared to Chung Mu’s five.

While she doesn’t get the extended smoke times of US smokescreens, the shorter cooldown means less waiting for the next if she has to abandon a smokescreen early.

Sejong is one of the most agile cruisers at Tier IX, with an excellent rudder shift and turning circle. Unlike the preceding ships, Sejong is one of the slowest in her tier. Although her handling is slightly worse than VIII Harbin, players familiar with the lower tier cruisers should still feel comfortable in Sejong.

If absolutely necessary, players can use her excellent agility to survive in the open. But her floaty shells, lack of health and armor, and slow speed make this a risky and less effective last resort if island or smoke cover is available.

Like her predecessors, Sejong is the exact opposite of durable. She has the second smallest health pool of any Tier IX cruiser, and one of the lowest out of all Tier VIII to X cruisers. Sejong inherits Austin’s armor, including a 32mm main belt that can provide some protection against battleship AP and smaller caliber cruiser shells. However, she also shares Austin’s relative lack of armor elsewhere, with 16mm bow, stern, and deck plating and a vulnerable citadel that extends well above the waterline.

Sejong's excellent concealment also aids in her survival. When fully upgraded, her surface detection can get as low as 9.7km. Although some Tier VIII cruisers can still outspot her, she is one of the stealthiest cruisers at Tier IX or X. She can sneak around the map and get closer to a cap or move between island cover before getting spotted. Her low 5.5km smoke firing penalty also allows her to farm from smoke with less risk of enemy destroyers spotting her.

Players should not rely on Sejong’s health or armor to keep her alive. Staying undetected, along with a player’s ability to dodge incoming fire when spotted, will be her main sources of protection.

As an anti-aircraft focused cruiser, Sejong has an impressive anti-aircraft suite to deter enemy planes. Although she doesn’t have the 6.9km reach of ships like IX Seattle or Neptune, her long range defenses and flak are still some of the strongest at Tier IX. Although Seattle’s flak deals slightly more damage per individual explosion, Sejong produces more flak per salvo than any other Tier IX cruiser. Her mid range defenses are below average for the tier, but in exchange they have some of the longest range. Although her close range defenses lack the extended reach of Dmitri Donskoi and Dalian, only Alaska’s deal more damage.

Like the other tech tree cruisers, Sejong mounts the Defensive AA Fire consumable by default, which can increase her defenses even further.

Her long range defenses and high flak count offer more than enough protection to deter attacking planes and cover nearby allied ships. A determined carrier will still be able to get a strike through, but it will be costly.

Just as with Austin, Flint, and other small caliber cruisers, Sejong prefers to play around island cover. With her high shell arcs, she can comfortably fire over her protective island armor to provide support in a cap or farm battleships. Her smokescreens allow her to produce an ‘island’ on demand if necessary, but her lack of hydro leaves her more vulnerable to incoming torpedoes.

Availability of researchable upgrades for Sejong is as follows:

upgrade. Those that wish to play Sejong as a torpedo cruiser should instead select Torpedo Tubes Modification 1

to increase Sejong's lackluster firing range. However, her floaty shells and long flight times will limit the usefulness of that extra range to farming battleships and stationary cruisers.

Ships of Pan-Asia
Cruisers
Retrieved from "http://wiki.wargaming.net/en/index.php?title=Ship:Sejong&oldid=319608"
Categories:
Your location:
To log in, select the region where your account is registered
CIS Europe North America Asia
Or use Microsoft Login to enter WoT XBOX ecosystem
Log in