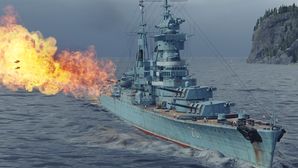 This Project 68-bis light cruiser, built as Ordzhonikidze for the Soviet Navy, had good AA defenses and carried twelve 152 mm guns with a very long range of fire. In 1963, the ship was transferred to the Indonesian Navy.

The Pan-Asian Tier VIII Premium cruiser Irian is remarkably similar to her sister ship, Mikhail Kutuzov. There are a few key differences between the two: Irian gains a better torpedo suite, along with the Torpedo Reload Booster

, and some of her range.

However, should captains find themselves a touch closer to their foes, Irian possesses a stinger — potent deepwater torpedoes. While these lose the ability to harm destroyers, they are perfect for taking down larger ships. At 13.5 km they are the longest ranged torpedoes put on a cruiser in World of Warships, and are very stealthy with a sizeable punch. While getting into the ranges required to use them is risky due to Irians’ relative fragility, they are a welcome addition to her arsenal — especially with her Torpedo Reload Booster consumable that allows captains to quickly launch a second salvo.

As a premium ship, Irian has no module upgrades to research.

As a premium ship, Irian comes with Default permanent camouflage and a set of permanent combat bonuses.

Ships of Pan-Asia
Cruisers
Retrieved from "http://wiki.wargaming.net/en/index.php?title=Ship:Irian&oldid=324477"
Categories:
Your location:
To log in, select the region where your account is registered
CIS Europe North America Asia
Or use Microsoft Login to enter WoT XBOX ecosystem
Log in