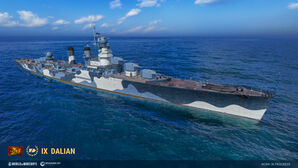 A variant of a small cruiser project developed in the U.S.S.R. with dual-purpose artillery (MK-6). She had reinforced anti-aircraft and anti-submarine armament of the post-war generation.

Dalian was first released for sale on 4 February 2022.

The Pan-Asian premium light cruiser Dalian represents a side-grade over her tech tree counterpart Sejong. On paper, she loses one sixth of her potential gun damage output and the devastating combination of sixteen stealthy deep water torpedoes plus Torpedo Reload Booster

. However, in exchange, she gains better gun ballistics and standard torpedoes. With these tools, she can comfortably whittle down everything from battleships to destroyers from the comfort of her smoke – or in open water, for particularly daring captains (though not recommended).

Dalian's 27,400 HP is the lowest of all Tier IX cruisers, and the fourth lowest of all cruisers in her matchmaking spread. And of the three flimsier ships, two come from the her relatives in the Pan-Asian light cruiser line. This leaves her within a single overpen's worth of damage away from "worst in Tier VII", with a pool that sits between Flint and her infinitesimally bulkier sister Atlanta.

What does this mean, in practice? A single turret from most battleships in tier can take her health from "full" to "underwater". An unlucky Shimakaze torpedo hit will leave the ship with less than five thousand health, even with Survivability Expert. This doesn't leave much room for error.

Furthermore, Dalian carries essentially zero useful armor. With a small amount of bad luck, the ship will eat citadel damage from essentially every angle. Dalian's mostly covered in 16mm of armor plating, so any ship with a 229mm or larger main battery will overmatch. This means that French and British "Big Gun" heavy cruisers will deal critical damage with ease. Obviously, Super Cruisers, Battlecruisers, and Battleships likewise can do the same. If this weren't enough encouragement, each torpedo hit will deal just short of its maximum damage, due to a measly torpedo protection value of 4%. Clearly, captains should pay special attention to avoiding hits from shell, airstrike, and torpedo alike.

However, Dalian's armor scheme comes with two consolation prizes. First, the 95mm main armor belt generally resists DD citadels starting at the 5km mark. German, French, and Soviet destroyers with powerful main batteries mark the important exceptions, as they can citadel at medium and long ranges. Needless to say, captains should respect this risk by angling.

The other consolation prize is a narrow 16 meter beam. Like her distant cousin Smolensk, Dalian's thin armor scheme and narrow beam can induce over-penetrations at sufficiently close ranges with some reliability. This isn't a recommended gamble, for obvious reasons. But if a battleship somehow doesn't send a broadside Dalian to port, this is why.

Aside from the above, there's two more defensive tools to consider: Anti-Aircraft weaponry and the Smoke Generator

consumable. Unfortunately, Dalian doesn't retain the good AA of her tech tree cousin: she outputs between two fifths and three quarters of her cousin's damage, depending on range. The loss of Defensive AA Fire

just increases this difference. As such, her anti-aircraft suite is merely average for her tier. As a result, captains should consider the possibility of air spotting in Carrier matches. That said, with the Pan-Asian Smoke Generator consumable, Dalian can engage enemies from the relative safety of a high-uptime smokescreen, which partially mitigates this aerial threat.

upgrade. Those that wish to play Dalian as a torpedo cruiser should instead select Torpedo Tubes Modification 1

to increase Dalian's firing range. However, her floaty shells and long flight times will limit the usefulness of that extra range to farming battleships and stationary cruisers.

As a premium ship, Dalian comes with Default permanent camouflage and a set of permanent combat bonuses.

Ships of Pan-Asia
Cruisers
Retrieved from "http://wiki.wargaming.net/en/index.php?title=Ship:Dalian&oldid=323794"
Categories:
Your location:
To log in, select the region where your account is registered
CIS Europe North America Asia
Or use Microsoft Login to enter WoT XBOX ecosystem
Log in