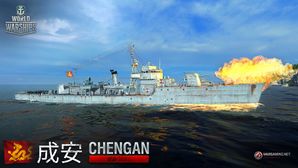 This small escort ship (kaibōkan) was built during World War II for the Imperial Japanese Navy. In 1947, she was transferred to the Republic of China.

The start of the Pan-Asian tech tree, Chengan is best played at medium to long range. She is the smallest ship at her tier, and compensates for a lack of armor with agility and concealment. Her small size and fast rudder shift make her a difficult target to hit. When under fire, captains should use evasive maneuvers such as weaving and try to maintain 7 to 8 kilometers of distance between themselves and the enemy.

If Chengan finds herself in a close-range engagement, she will struggle to penetrate the citadel armor belt of Erie, Hashidate, and Hermelin. If this occurs, aim for the bow, stern, or superstructure to avoid non-penetrations. Despite her inability to hit the citadel of those ships, Chengan is capable of penetrating the citadel armor belt of Black Swan, Bougainville, and Orlan. If any of those three ships show their broadside, captains should aim for the waterline under the smoke stack to inflict severe damage. Captains should also utilize Chengan's excellent concealment to dictate the engagement. When fully specialized, Chengan will not be out spotted by any of the other Tier I ships. This stealthiness enables her to set up ambush-style attacks or disengage from a greater enemy force.

Availability of researchable upgrades for Chengan is as follows:

Players wishing to progress further in the line should prioritize research and purchase of Longjiang. For players who enjoy playing Chengan, GFCS Type 1 Mod. 2 is an inexpensive upgrade to research and mount.

The recommended upgrades for Chengan are as follows:

Key skills for Chengan commanders include Advanced Firing Training and Concealment Expert. With extended firing range and better detection range, Chengan can engage from greater distances and slip back into concealment if she encounters accurate enemy fire.

Chengan can equip the following consumables:

) flags which increase her top speed to be more competitive.

Ships of Pan-Asia
Cruisers
Retrieved from "http://wiki.wargaming.net/en/index.php?title=Ship:Chengan&oldid=319602"
Categories:
Your location:
To log in, select the region where your account is registered
CIS Europe North America Asia
Or use Microsoft Login to enter WoT XBOX ecosystem
Log in