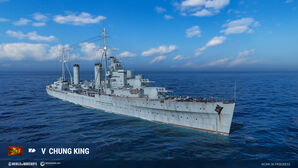 A light cruiser built in Britain. Designed for combat operations within squadrons and for hunting down enemy destroyers. In 1948, she was transferred to the Republic of China Navy.

Tier V Chungking marks the start of the Pan-Asian cruiser line and introduces players to the defining characteristics of future ships. She features powerful deepwater torpedoes, a smoke generator, and decent AA defenses for her tier, but has lower survivability and weaker main guns.

Her tight 570m turning circle and quick 6.4 second rudder shift help her avoid incoming attacks. However, her 32.3 knot top speed is on the slow side for a Tier V cruiser. Chungking has a good concealment which can be reduced to just 9km, allowing her to reach advantageous firing positions unseen or disengage from dangerous situations.

, which is active for 5 seconds with a 60 second cool down, and a Smoke Generator

. The smoke generator has a long emission time of 30 seconds creating a large smoke cloud, although each individual puff will disperse after 70 seconds, which is shorter than those created by British cruisers.

Chungking cannot rely on her armor to protect her. Her 13mm bow and stern plating can be overmatched by heavy cruiser AP shells and all HE will penetrate it. Her citadel plating is only 70mm thick, offering little protection against broadside shots. This thin armor combined with one of the smallest HP pools for a Tier V cruiser mean any incoming fire has the potential to cause serious amounts of damage in a short time.

Chungking mounts a relatively small main battery of six 152mm guns in three twin turrets, with a short firing range of just 12km. These guns reload slowly for their caliber at 9.5 seconds. Her low barrel count and relatively slow reload time mean she has one of the lowest DPM totals of Tier V cruisers. Even most Tier IV cruisers have more HE and AP DPM. This is further compounded by her low base fire chance of 9% per shell, meaning Chungking can only expect to set up to 3 fires per minute. Her slow turret traverse also makes it difficult to quickly switch targets.

Chungking mounts a triple torpedo launcher on each side with good firing angles. Her torpedoes are some of the strongest carried by any Tier V cruiser, with a 9.5km range and high damage and flood chance. They also have a low detection range, typically allowing ships less than 5 seconds to react. However, her reload time of almost 2 minutes limits the number of salvos she can launch. Players should also bear in mind that deep water torpedoes cannot damage destroyers.

Chungking has some of the best long range AA defenses at Tier V, even outperforming many battleships. Her long range guns reach out to 5.8km with some of the highest DPM at Tier V. They also produce 8 flak bursts, which can deal significant damage to aircraft that stray into range. The rest of her AA defenses are adequate for a Tier V cruiser; they can deal significant damage to Tier IV aircraft squadrons but are unlikely to deter a determined Tier VI carrier. Players should keep enemy aircraft at long ranges and use her long range AA defenses to support friendly ships under air attack.

Chungking can be a challenging ship to play. Her low main battery DPM and slow turret traverse, slow torpedo reload, and small health pool mean she is unsuited to a straight up fight with almost any enemy ship. Even a Tier V destroyer can be a dangerous opponent. As Chungking does not have access to hydroacoustic search, players should be wary around enemy destroyers or when sitting in her smokescreen. Instead, she should use her concealment to reach a position to support team mates where she is less likely to become a target herself. Effective use of island cover and smoke screens is essential to reduce incoming fire and preserve health to remain in the battle.

Chungking should make use of her torpedoes where possible. They can be fired from stealth against distracted enemies or used while kiting away from enemy cruisers and battleships. Short range torpedo attacks can be devastating but reaching a launch position safely requires advance planning and use of cover.

The Arethusa class was a class of four light cruisers built for the Royal Navy between 1933 and 1937 and that served in World War II. Designed as a "Trade Route cruiser" to counter the threat of commerce raider against British merchant shipping Their design was based on a downsized Leander class cruiser and would allow the Royal Navy to build six Arethusa class ships in place of five Leander class ships whilst remaining within tonnage restrictions imposed by naval treaties. The reduced combat capabilities compared to the Leander class was not deemed to be a problem for a ship intended to fight auxiliary cruisers and six ships could protect a larger area than five more capable ships. The class featured a similar overall armour scheme to the Leander class but with reduced thickness to save weight. Main armament was six 152mm guns in three twin turrets, two forward and one aft. Additional armament consisted of four or eight 102mm secondary guns and six torpedo tubes.

In the end only four Arethusa class ships were built, the final two ships that were planned had their orders cancelled and they were instead ordered as Town Class cruisers. The four ships of the class saw heavy action, particularly in the Mediterranean battles where they served as part of the main fleet rather than in their originally intended role of trade protection.

Originally commisioned as HMS Aurora for the Royal Navy in August 1936, she was assigned to the Home Fleet until 1941 and took part in the Norwegian Campaign and operations in Arctic waters. She was transferred to the Mediterranean and arrived in October 1941. As part of the Mediterranean Fleet she took part in several battles and was damaged by mines in December 1941. She returned to the Mediterranean in November 1942 for the Landings in North Africa, Operation Torch. In December she was part of Force "Q" at Bône against the Axis convoys between Trapani and Tunis. Aurora took part in the invasion of Sicily and the Salerno landings. She moved to the Aegean in October 1943 where she was damaged by bombs on the 30th of October, and withdrew to Taranto for repairs which were completed in April 1944. In August 1944 she supported the landings in the south of France, then assisted in the liberation of Athens.

After the war it was announced that HMS Aurora would be sold to China to compensate for the loss of several Chinese ships that Britain had taken and lost during the Japanese invasion of Hong Kong in 1941. She was refitted in Portsmouth and handed over to Nationalist China in 1948 and renamed Chung King after the war time capital of China. During the Chinese Civil War she provided naval gunfire support for Nationalist troops during the Battle of Tashan in October 1948. In February 1949 her crew defected to the Communist side and brought the ship with them. In March 1949 she was sunk in Huludao harbour by Nationalist bombers during an air raid. She was later salvaged with the aid of the Soviet Union but largely stripped bare as repayment and became a hulk used for storage and as a barracks. Later plans to convert her to a salvage ship were cancelled and she was scrapped during the Cultural Revolution.

Ships of Pan-Asia
Cruisers
Retrieved from "http://wiki.wargaming.net/en/index.php?title=Ship:Chungking&oldid=322591"
Categories:
Your location:
To log in, select the region where your account is registered
CIS Europe North America Asia
Or use Microsoft Login to enter WoT XBOX ecosystem
Log in