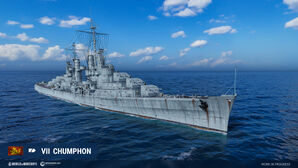 A light American-built Atlanta-class cruiser designed for use in joint operations with destroyers. Compared with the initial project, she had enhanced short-range AA armament at the cost of a reduced number of main battery turrets.

At first glance, Chumphon looks like a direct clone of Flint, which is for the most part largely true. Both ships share the same 127mm dual-purpose main batteries, have the same 32.5 knot maximum speed, and have virtually the same hitpoint pool when fully upgraded. However that is where the similarities end. Although Chumphon looks like it was directly cloned, there are a few key differences.

The most striking difference between Chumphon and Flint are the torpedoes they possess. While Flint wields torpedoes that can strike any target, Chumphon possesses the signature Pan-Asian deep-water torpedoes. These are limited in their choice of targets as they are incapable of attacking destroyers, but in exchange are far less detectable than normal torpedoes. In addition to this, she is equipped with the Torpedo Reload Booster

consumable, which is something her american counterpart cannot possess.

The 5-inch guns are also different. Although they have similar performance, having the same damage values for their shells and have the same turret traverse speed, Chumphon has a standard reload time of 6.5 seconds, compared to Flint's 5.1 second reload. This means that Chumphon will have a somewhat more difficult time attempting to farm damage, and in certain circumstances the longer reload could mean life or death. As a result, players must play carefully if they want to make it to at least the mid-game, as the reload will hamper the ship's ability to take down destroyers.

To summarize, Chumphon is essentially a nerfed Flint, trading reload speed and torpedo target choices in exchange for torpedo detectability and focusing more on a torpedo build. Players will need to be more careful playing her around destroyers because of her incapability to strike them with torpedoes, and also due to a longer reload.

Availability of researchable upgrades for Chumphon is as follows:

HTMS Chumphon was named after Abhakara Kiativong, Prince of Chumphon, commonly revered as "The Father of the Thai Navy". His name bore several warships of the Royal Thai Navy, which are the Matchanu-class submarine, and the Chonbori class(I) torpedo boat.

Ships of Pan-Asia
Cruisers
Retrieved from "http://wiki.wargaming.net/en/index.php?title=Ship:Chumphon&oldid=319606"
Categories:
Your location:
To log in, select the region where your account is registered
CIS Europe North America Asia
Or use Microsoft Login to enter WoT XBOX ecosystem
Log in