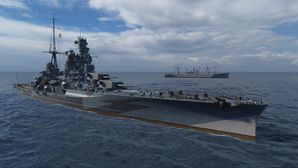 Sitting at Tier VII, Italian premium heavy cruiser Gorizia is nearly identical to Zara, sharing the same hull and gun set up as her tech tree sister. Captains familiar with Zara will recognize Gorizia’s excellent ballistics and maneuverability, as well as her access to the Exhaust Smoke Generator

. The key difference between the two ships is that in exchange for the long-range torpedoes normally found on Italian cruisers, Gorizia has access to the Hydroacoustic Search

Gorizia is armed with eight 203-millimeter guns in a 4x2 configuration that load either SAP or AP shells. Despite having one of the worst guns at Tier VII dpm wise, the alpha strike potential and the characteristics of her shells make up for it. These shells leave her barrel at an astounding 900 meters per second making them difficult to dodge. Her SAP shells can penetrate up to 54 millimeters of armor, posing a significant threat to enemy destroyers and cruisers. It is not uncommon to see 7-8k chunks being taken off enemy cruisers and destroyers that fall prey to Gorizia’s SAP. Gorizia’s AP shells, while having above average penetration values, are underwhelming as they cease to be effective if the enemy gives an angle. As such, the ammo type of choice should be the SAP shells, only switching to AP against enemy cruisers that are showing flat broadside.

Gorizia enjoys a 70mm citadel roof, ensuring that battleship shells that penetrate through her deck have little to no chance of reaching her citadel. In addition, her midsection is protected with a 30mm armor plate, capable of bouncing large caliber battleship shells when properly angled. However, her bow and stern plating is only 16 millimeters. Thus, when engaged with an enemy battleship, captains should attempt to dodge in such a way as to either avoid the enemy shells entirely or to have them hit her angled midsection.

Cruiser captains will be delighted to discover that Gorizia turns on a dime, with a turning circle of 580 meters - one of the most maneuverable cruisers at Tier VII. This can be used to make her a difficult target to hit, as she weaves in and out of shells and torpedoes on a moment’s notice.

consumable with a range of 6km, the best at her tier. This consumable, when used in tandem with her standard Italian Exhaust Smoke consumable and her SAP makes Gorizia a potent hit and run destroyer killer.

All in all, Gorizia can be best described as a side grade over her tech tree counterpart Zara. Her hydroacoustic search offers an aggressive play style and helps her specialize in killing enemy destroyers and cruisers.

As a premium ship, Gorizia comes with Default permanent camouflage and a set of permanent combat bonuses.

Ships of Italy
Cruisers
Retrieved from "http://wiki.wargaming.net/en/index.php?title=Ship:Gorizia&oldid=319471"
Categories:
Your location:
To log in, select the region where your account is registered
CIS Europe North America Asia
Or use Microsoft Login to enter WoT XBOX ecosystem
Log in