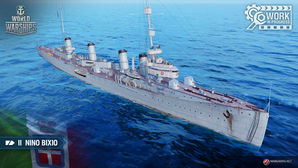 Built shortly before the outbreak of World War I, this turbine-powered cruiser was to be used as lightweight and high-speed reconnaissance ship. The vital elements of the ship were protected by an armored deck.

Nino Bixio’s firepower includes eight 120mm guns in single turrets, with three each on the port and starboard sides, and two aft. Because of this peculiar layout, not all of Nino Bixio’s guns can be aimed at any single enemy. While her guns have potential for a high alpha strike, her slow reload time of 12 seconds prevents her from rapidly damaging enemies. The main feature of her guns is her access to Semi-Armor Piercing (SAP) shells, instead of HE shells found on most other ships. This allows Nino Bixio to heavily damage destroyers and other lightly armored targets. However, this strength is held back by her inability to set fires or effectively damage ship modules. In terms of AP performance, her unusually good ballistics compared to other Tier II cruisers and penetration allow her to outclass many cruisers at her tier, despite her smaller 120mm guns.

Nino Bixio does not get access to torpedo armament, which is a disadvantage in close range engagements, where many of her peers have torpedoes. Being a cruiser designed before World War I, Nino Bixio has incredibly poor AA defenses. However, being a Tier II ship, she will not face any aircraft carriers in battle. In addition, she has poor secondary armament, featuring inaccurate guns of a low caliber, and below average damage output.

Nino Bixio’s survivability on paper appears to be quite poor. This is partly true, as she has a feeble health pool of only 16,600 when fully upgraded. Her armor is just as bad; she is covered in a mere 6 millimeters of armor. However, Nino Bixio does have access to a steep turtleback armor layer, whose 38 millimeter thickness can protect her against some low caliber AP shells. Because of her slim hull shape, many battleship AP shells are liable to either overpenetrate Nino Bixio, or miss her entirely at closer ranges.

In terms of handling, Nino Bixio is strong. She is the fastest cruiser at her tier, reaching speeds close to 27 knots without Sierra Mike equipped. She also features a quick rudder shift time of 4.8 seconds fully upgraded, and a very tight turning circle of only 480 meters. Captains of Nino Bixio should be alert to incoming fire, and use her superb handling to evade the enemy’s shells, as her armor and health are weak. Nino Bixio also features excellent concealment for her tier, allowing her to effectively control engagements, and carry out surprise attacks on enemies.

Taking all of her characteristics into account, captains of Nino Bixio should adopt a conservative playstyle, using allies and islands as cover to stay safe while crippling enemy cruisers and destroyers with her effective SAP rounds. She should avoid close range fights, as her weak armor and lack of torpedoes will mean a quick punishment for overly aggressive play.

After the success of the scout cruiser (esploratori) Quarto, the Regia Marina sought to procure a new class of the ship types, which would become the Nino Bixio-class.

The esploratori concept was born out of the need for fast scouts that could be used to make contact with the enemy and report their position, as well as fight enemy scout vessels. For this, the Regia Marina had built an ‘unprotected’ turbine powered protected cruiser, Quarto, which had used ten Blechyden boilers (eight coal-fired, two oil-fired) and four Parsons steam turbines. This produced 25,000 shp, giving the 3,440-ton fully loaded) cruiser a top speed of 28 knots. Armor was limited to the 40mm protected deck and the 100mm conning tower, and the armament was based on powerful 120mm cannons with 76mm anti-torpedo boats as backup. Torpedo tubes and minelaying capacity were included.

Based on this design, the Regia Marina ordered two more esploratori, which were some 500 tons heavier and would have, it was hoped, more powerful machinery. The result was the Nino Bixio-class. Weighing in at 4,141 tons fully loaded they were significantly heavier than Quarto, mostly due to the more powerful machinery. The design was reduced to three shafts (with Curtiss turbines), but now had fourteen Blechynden mixed-firing boilers, with the overall length and breadth of the cruiser increasing by 7 and 0.2 meters respectively. Though the machinery was more powerful in output per shaft, overall power was reduced (to 22,500 shp - 8,000 shp on the outer shafts, 6,500 shp on the centerline) and this combined with the increased displacement caused the top speed to fall to 26.5 knots. Adding insult to injury the Curtiss turbines were far more unreliable compared to the Parsons turbines, further reducing the usefulness of the ‘improved’ vessels compared to Quarto.

Nino Bixio was laid down at the Royal Yards at Castellamare di Stabia on 15 February 1911, and was launched before the year was out (30 December 1911). Fitting out dragged on, however, and the ships was only completed on 5 May 1914. Trials had been run in 1913, and were disappointing – at a normal displacement (3,515 tons) she had managed to work up to 24,000 shp, for a top speed of only 26.82 knots, far short of the intended 29 knots. She commissioned on the day she was considered completed, and was named after Nino Bixio, a significant figure of the Risorgimento movement – he had served in the Sardinian Navy before these wars, before joining Giuseppe Garibaldi on land with his Alpine Hunters, and later accompanied Garibaldi on his expedition of the thousand. Later, he became a politician. The ship’s motto was Obbedire e tacere (Obey and be silent).

Joining the Regia Marina on 1 July 1914, Nino Bixio was initially stationed in Cyrenaica, moving from various ports in eastern Libya, until her return to Italy when she made Taranto on 16 August 1914.

When Italy entered the First World War on 23 May 1915, Nino Bixio was stationed at Brindisi along with the other Italian scout cruisers (her sister Marsala, and Quarto). This allowed them to cover the Otranto barrage, a network put in place by Entente and Allied forces to prevent Austrian and German submarines from breaking out into the Mediterranean. In practice the barrage was useless, but regardless it served as a major target for Austrian surface forces, which repeatedly attempted to attack it. On 5 June Nino Bixio, escorted by four destroyers (two French, two Italian), conducted a bombardment of Austrian positions on the islands of Lissa and Sant’Andrea.

On 29 December 1915 Nino Bixio took part in the Battle of Durazzo. The Austrians had deployed a scout cruiser and five destroyers to destroy two Italian destroyers reported off the coast of Durazzo. The Austrian force blundered into the freshly laid Italian minefield, losing one destroyer and suffering damage to another, with another fouling a screw. The Austrian force called for backup (an armored cruiser and four torpedo boats), knowing Allied ships would soon be on top of them. Two allied forces were in a position to respond, each consisting of a pair of light cruisers with destroyer escorts. Nino Bixio was in the second force, carrying the flag of Rear Admiral Alfonso Belleni. The first group had managed to engage the Austrian force, which was fleeing northwest, but Belleni’s group was able to cut them off, forcing them to turn away to the southwest. However, in the running fight they were further behind the other forces, and so their gunfire was relatively ineffective. When the Austrians finally made their break north, they were able to slip by in the dark, with the brief gunfight resulting in a single hit to the topsides of Nino Bixio.

On 2 August 1916, Nino Bixio was briefly involved in another battle, the Action off Cattaro, where she briefly (and ineffectually) traded fire with the Austrian cruiser Aspern. Shortly after the clash, she came under attack by Austrian submarine U-4, but the two torpedoes missed the esploratori. In May of 1917 she missed another chance to grapple with her foes, as she had no steam in her boilers during the Austrian raid that resulted in the Battle of the Otranto Straits, thus preventing her from taking part. On the evening of 3 September, she, along with British cruiser Weymouth and an escort of two Italian and two French destroyers, slipped anchor to escort a force of torpedo floatplanes and MTBs for a planned raid on Cattaro, but were forced to cancel the operation and return to port due to the poor weather. This would be the last major chance she had at clashing with the Austrian surface forces, and her life continued in routine missions since then. As of 4 November 1918, when the Austro-Hungarian empire capitulated to Italy, Nino Bixio had conducted a total of 54 war missions.

Much of 1919 was spent on peacekeeping missions. Her first deployment was to Spalato (Split) from 24 February to 10 July, until she sailed to Zara (Zadar), where she remained until the 19th. She then went on a chain of diplomatic missions around the former Ottoman empire, which ended on 19 October. Another chain of missions in this theme were conducted throughout 1921-1922, before arriving in Taranto once more on 4 March 1922 for a refit. On 10 July 1924 she was put under the command of the light division, though in August she was briefly deployed to Navarino. At the end of 1925 she was assigned to the Scout Division (Divisione Esploratori). In 1927 she was assigned to the Scouting Group along with the light scout (esploratore leggere) Premuda, the former German S-113, based in Taranto, but at the end of October it was re-assigned to Pola, but this was more a paper assignment, as in reality she served as a barracks ship at Trieste for the crew of the new treaty cruiser Trieste.

Although much of the ship was still in fair condition, the ever-present issues with her machinery, which had steadily gotten worse as the cruisers aged, had left the warship with little value to the Regia Marina. Nino Bixio was disarmed on 1 March 1929, and officially stricken from the naval register on 15 March 1929, after which she was sold for scrapping,

Ships of Italy
Cruisers
Retrieved from "http://wiki.wargaming.net/en/index.php?title=Ship:Nino_Bixio&oldid=318970"
Categories:
Your location:
To log in, select the region where your account is registered
CIS Europe North America Asia
Or use Microsoft Login to enter WoT XBOX ecosystem
Log in