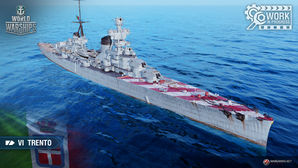 Trento belonged to the first series of Italian cruisers that were built under the restrictions of the Washington Naval Treaty. The ship carried 203 mm main battery guns. She was faster than her foreign counterparts and outmatched them in armor protection, though to a smaller extent.

Tier VI Trento is the first heavy cruiser of the Italian tech tree. She shares many similarities with her Tier V cousin Genova, including identical shell characteristics and caliber as well as comparable agility, although Trento does have a faster reload and slightly better top speed and turning circle. Despite having larger guns than the light cruisers that precede her, her play style doesn’t change that drastically, particularly when compared to Tier V Raimondo Montecuccoli.

Trento is armed with eight (8) 203mm guns in four (4) twin turrets. Like many lower tier heavy cruisers, both her reload speed and turret traverse speed are on the slow side. The latter can be offset using the commander skill Grease the Gears and the Main Battery Modification 2 ship upgrade. Having access to both semi-armor-piercing (SAP) and armor piercing (AP) shells, Trento has the potential for high alpha strikes, but her long reload prevents her from damaging ships quickly and that makes good target selection critical.

Due to its consistent damage and improved ricochet angles, Trento’s primary shell type should be SAP. It excels at damaging lightly armored targets, including destroyers and the more thinly armored cruisers that are common in Trento’s matchmaking range. However, as SAP can ricochet and doesn’t set fires or damage modules (unlike HE), Trento will struggle against sharply angled targets and higher tiered battleships with thick armor plating.

Although her SAP seems universally useful, Trento’s AP shouldn’t be overlooked. Although it is best used against broadside cruisers at close to medium range, 203mm AP can be deadly at a tier where many cruisers have vulnerable citadels and thinner armor. It can also be effective against battleship upper belts at closer range, but the dangers of getting into that range mean SAP still should be Trento’s primary shell against them.

Trento is also armed with a pair of torpedo launchers[1] — one on each side — with fairly comfortable firing angles. They have a long range for a Tier VI cruiser and slow speed, making them effective area denial weapons, and while their reload is longer than Raimondo Montecuccoli a tier lower, by the time the first set reaches max range another set will almost be reloaded. The slow torpedo speed especially can catch an unsuspecting enemy captain off guard. But their low damage means they’ll be more useful as a source of additional damage rather than a primary offensive weapon. Against cruisers, hitting just a single torpedo could cripple the target and hitting two or all three could kill it outright. But against battleships and carriers, even all three hitting might not be enough to sink it.

Because Trento’s bow and stern armor is only 16mm thick, every battleship in the game (and even VI Graf Spee) can overmatch her bow and stern. However, her main deck and upper belt are 25mm thick, which can bounce up to 356mm AP when correctly angled. Against lower tier battleships, this can be a huge advantage, but most higher tier battleships and even some same tier battleships (like VI Bayern and VI Queen Elizabeth) can still overmatch this section. She also features a higher than average health pool for a Tier VI cruiser. Captains should take note, however, that her citadel is large and extends quite a distance above the water. Protected by just a single layer of 70mm armor, cruiser and battleship AP rounds can easily penetrate it and quickly drain her health pool. While her armor and health pool don’t offer a lot of protection against higher tier opponents, when top tier, a well-played Trento can be a difficult ship to kill.

All Tier V and up tech tree Italian cruisers (plus premium Tier VII cruiser Gorizia) mount an Exhaust Smoke Generator that can conceal the ship even at full speed. It can be used offensively to prevent being spotted while firing at enemies (although the smoke firing penalty makes this less dangerous at longer ranges). But it also has a useful defensive role, allowing her to turn and disengage without exposing her vulnerable citadel in the process.

Neither Trento’s secondary nor her anti-aircraft armaments are anything spectacular. She has three (3) secondary turrets on either side, each containing two (2) 100mm guns, but they can only penetrate the thinner armor of destroyers and cruiser extremities. And the low barrel count and longer reload mean they won’t even be a great deterrent against those targets. Being an interwar cruiser designed and built during the 1920s, Trento’s anti-aircraft suite will likewise provide little protection against air strikes from same and higher tier carriers. Trento can mount the fighter consumable to further boost her anti-aircraft defense if desired, but a determined carrier captain won’t be deterred.

Like the rest of the Italian cruiser line, one of Trento’s greatest strengths is her agility. Her top speed is respectable, but not outstanding compared to same-tier cruisers, and her decent rudder shift and smaller turning circle mean she can dodge a lot of incoming fire.

Due to her high speed and decent agility, Exhaust Smoke Generator, and the peculiarities of her SAP shells, Trento is most comfortable on a flank. Her weaker armor means she should avoid close quarters combat, especially against battleships, and her weaker torpedo armament may not be enough to prevent an enemy ship from charging her. In the early stages of the game, she should focus on dealing damage to destroyers and cruisers, using her Exhaust Smoke Generator and distance to go undetected if she gets focused. Later on, she can get closer to the enemy and use her AP and torpedoes more aggressively, but she is still more comfortable playing at a distance.

Availability of researchable upgrades for Trento is as follows:

The recommended upgrades for Trento are as follows:

Due to the absence of HE shells and a limited number of consumables, Trento captains are not under a high amount of pressure when it comes to skill point distribution. The primary consideration is whether the player wishes to build the captain towards increased DD-hunting effectiveness [Radio Position Finding] or general purpose survivability [Survivability Expert, Last Stand, and/or Incoming Fire Alert].

Trento can equip the following consumables:

Trento was the first of two Trento-class cruisers; they were the first heavy cruisers built for the Italian Regia Marina (Royal Navy). The ship was laid down in February 1925, launched in October 1927, and was commissioned in April 1929. Trento was very lightly armored, with only a 70 mm (2.8 in) thick armored belt, though she possessed a high speed and heavy armament of eight 203 mm (8.0 in) guns. Though nominally built under the restrictions of the Washington Naval Treaty, the two cruisers significantly exceeded the displacement limits imposed by the treaty.
Trento frequently served as the flagship of the Cruiser Division throughout the 1930s. During the pre-war period, she also made lengthy trips abroad, including a tour of South America from May to October 1929 and a deployment to China from January to June 1932 to protect Italian nationals during the Chinese Civil War. She also took part in numerous naval reviews held for visiting foreign leaders.
After Italy entered World War II in June 1940, Trento saw extensive action in the Mediterranean Sea, including at the battles of Calabria, Cape Spartivento, and Cape Matapan in July and November 1940 and March 1941, respectively. She was also present during the inconclusive First and Second Battles of Sirte, and at the latter she severely damaged a British destroyer. Trento was also frequently tasked with escorting convoys to supply Italian forces in North Africa as well as interdicting British convoys to Malta. During one of the latter missions to attack the British Operation Harpoon convoy in June 1942, Trento was torpedoed twice, first by a Bristol Beaufighter torpedo bomber and then sunk by the submarine HMS Umbra with very heavy loss of life.

Ships of Italy
Cruisers
Retrieved from "http://wiki.wargaming.net/en/index.php?title=Ship:Trento&oldid=318973"
Categories:
Your location:
To log in, select the region where your account is registered
CIS Europe North America Asia
Or use Microsoft Login to enter WoT XBOX ecosystem
Log in