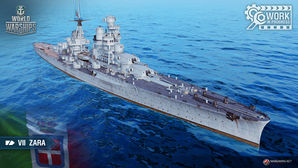 During the pre-war period, she was one of the best heavy cruisers in the world. The ship differed favorably from most contemporary counterparts by her good armor protection and overall well-balanced characteristics, but most of all, by her armament and speed.

Like the rest of the Italian heavy cruisers, Zara's defining traits are her SAP ammunition, good maneuverability, and Exhaust Smoke Generator

When looking at visible statistics, Zara and her predecessor barely differ. Both use a 203mm main battery in a 4x2 layout, and both share the same torpedoes mounted three to a side. These differences in firepower are expected, given the increased tier: a slight increase in alpha damage, a 0.5s decrease in reload, and a 7% increase in DPM and shell velocity.

This isn't to say that Zara's damage is spectacular for the tier. Indeed, the only reason why her AP DPM isn't the worst in tier is because her sister ship Gorizia has a half-second worse reload. However, given the anemic damage output of their AP, it rarely sees use, with the exception of broadside cruisers at a range close enough to guarantee citadels.

More important for her damage output is saturated SAP DPM. Unfortunately, Zara lacks here as well. Permanent fires generally contribute just under half of a cruiser's sustained damage, so even Indianapolis out-damages Zara with just a single blaze. As such, although Zara may see hefty initial salvos, finishing off kiting battleships is an excruciating task without fires to hasten the demise.

Finally, despite having the exact same torpedoes as Trento, they still are worth noting as an option. Due to their 51 knot speed and 7.5 second reaction time, actual hits may prove rare, but a single hit will deal enough damage to cripple unwary destroyers in smoke, and a full set can execute a severely damaged battleship in a drive-by –or guarantee a trade, if cornered.

As with Trento, Zara's best defense is dodging. Her defenses are slightly better, with upper belt armor strengthened enough to improve kiting ability. If sufficiently angled, the 30mm upper belt can even bounce the 16" shells found on Montana. However, this isn't damage immunity. 25mm deck armor still allows overmatch penetrations from most battleships in her matchmaking spread. Furthermore, 16mm bow/aft plating leaves the ship vulnerable to battleship penetrations and citadels.

In addition to these armor changes, Zara trades three knots of maximum speed for a 50m smaller turning circle. Her concealment is improved as well, with a fully upgraded detection of 12.19 km to Trento's 12.66 km. Still, despite the improvement, most cruisers (and some battleships) will still outspot her. Finally, her fully-upgraded health pool increases by 2,600 to 37,100 without Survivability Expert, which puts her above most cruisers in her tier.

consumable, and either Catapult Fighter

. Her AA is above average, though below that of an American cruiser. Rounding out her utility is a pair of depth charge launchers, which provide some amount of anti-submarine deterrent.

Availability of researchable upgrades for Zara is as follows:

As Zara has access to Spotting Aircraft, captains should upgrade Hull first.

The recommended upgrades for Zara are as follows:

Like the rest of the line, Zara captain builds do not require many skill points for effectiveness. Like many other cruisers, the first ten points go to Expert Loader, Priority Target, Superintendent, and Concealment Expert. After that, prioritize Adrenaline Rush and Survivability Expert in that order. The five remaining points can go to the player's choice of recommended skills. However, due to the ship's good maneuverability, players should strongly consider Incoming Fire Alert.

Zara can equip the following consumables:

Zara was a heavy cruiser built for the Italian Regia Marina (Royal Navy), the lead ship of the Zara class. Named after the Italian city of Zara (now Zadar, Croatia), the ship was built at the Odero-Terni-Orlando shipyard beginning with her keel laying in July 1928, launching in April 1930, and commissioning in October 1931. Armed with a main battery of eight 8-inch (200 mm) guns, she was nominally within the 10,000-long-ton (10,000 t) limit imposed by the Washington Naval Treaty, though in reality she significantly exceeded this figure.
Zara saw extensive service during the first two years of Italy's participation in World War II, having taken part in several sorties to catch British convoys in the Mediterranean as the flagship of the 1st Division. She was present during the Battle of Calabria in July 1940, the Battle of Taranto in November 1940, and the Battle of Cape Matapan in March 1941. In the last engagement, Zara and her sister ships Fiume and Pola were sunk in a close-range night engagement with three British battleships. Most of her crew, 783 officers and sailors, including the divisional commander Admiral Carlo Cattaneo, were killed in the sinking.

Ships of Italy
Cruisers
Retrieved from "http://wiki.wargaming.net/en/index.php?title=Ship:Zara&oldid=317665"
Categories:
Your location:
To log in, select the region where your account is registered
CIS Europe North America Asia
Or use Microsoft Login to enter WoT XBOX ecosystem
Log in