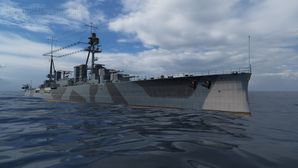 The project of a high-speed cruiser with 203 mm main guns, designed under the Washington Naval Treaty limitations. By appearance, she retained the features of ships belonging to an earlier era of ironclads. She served as a prototype for Trento-class cruisers.

The third Tier 5 cruiser in the game with 203mm main guns after the Japanese Furutaka and British Exeter, Genova's performance is centered around her main battery. Like other Italian cruisers, her HE shells have been replaced with SAP shells. These perform similarly to HE shells with good penetration, but cannot start fires. To take advantage of this ship's firepower, it is key to learn which ships in her matchmaking spread can be penetrated reliably with which ammunition. Heavily armored BBs which will require you to fire AP into the superstructure when angled can often be devastated by SAP into the broadside. Meanwhile, the powerful AP may citadel some angled cruisers while nearly always overpenetrating others. Becoming familiar with these situations is key to your success.

The guns have significant but easily mitigable weaknesses. It is key to remain near your somewhat short maximum firing range, which will increase your survivability tenfold while taking advantage of your guns' strong characteristics. The turrets have very poor rotation speed, further weakening Genova in knife fights and when caught unaware. Finally, in exchange for their atypical caliber, the reload is a miserable 20 seconds. Fortunately, above-average concealment allows the ship to take advantage of disappearing between powerful strikes. Good planning and clear foresight will keep these traits from being your frustrating end.

Genova may be comfortable against any opponent, but she truly excels against other cruisers. Her armor, health, and shell performance make her a frightening foe for her generally smaller peers.

In most other cases, the ship is quite average. Her armor is above-average, but it remains forgettable cruiser armor to large guns. Speed is slightly above average, and she has a somewhat sluggish rudder. AA defenses are functional but they're not likely to scare away any strike craft on their own.

Genova lacks a Hydroacoustic Search. This is probably her greatest weakness as compared to her cruiser peers at T5. Combined with the ship's length and rudder, it makes remaining aware of enemy torpedo vessels paramount, while precluding aggressive DD hunting.

All-in-all, Genova is a straightforward ranged support ship that will reward attentive play.

The recommended upgrades for Genova are as follows:

Genova can equip the following consumables:

As a premium ship, Genova comes included with Type XX camouflage that lowers her detection radius, reduces the accuracy of incoming shells, reduces her repair costs, and increases the amount of experience she earns.

Ships of Italy
Cruisers
Retrieved from "http://wiki.wargaming.net/en/index.php?title=Ship:Genova&oldid=300549"
Categories:
Your location:
To log in, select the region where your account is registered
CIS Europe North America Asia Republic of Korea
Or use Microsoft Login to enter WoT XBOX ecosystem
Log in