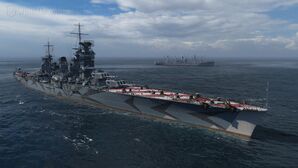 A further development of the preceding project, with the main battery reinforced by adding the fourth main gun turret. The elevation angle of the 203 mm guns made it possible to fire up at hostile aircraft.

Brindisi is a somewhat odd upgrade from the previous ship, Amalfi. The most obvious change is the addition of a fourth turret on her stern; however, this comes at the cost of an increased reload. Brindisi has 20 second reload vs. Amalfi's 16 second reload. Even with the upgrade, Main Battery Modification 3

, her reload is only reduced to 17.6 seconds. This trade-off between extra barrels and reload when moving up a tier isn't unique to this line; the move from Baltimore to Buffalo has a similar trade. Other improvements include extra hit points, a slightly faster rudder, and an extra kilometer of range.

Brindisi's play style is no different from that of Amalfi. Captains who played through the previous ship can transfer their knowledge without issue. One thing to consider, however, is that trying to keep all four guns on target may not always be the best choice, as the resulting amount of side shown can be potentially deadly.

Her game play is identical to other ships in the line; knowing where to aim to maximize the damage done by SAP, switching to AP for Russian and German battleships, focusing destroyers and angled cruisers, and re-positioning to maximize your effect on a battle.

Availability of researchable upgrades for Brindisi is as follows:

The recommended upgrades for Brindisi are as follows:

Brindisi can equip the following consumables:

Players who wish to spend doubloons can equip Brindisi with Type 19 camouflage that lowers her detection radius, reduces the accuracy of incoming shells, reduces her repair costs, and increases the amount of experience she earns.

Ships of Italy
Cruisers
Retrieved from "http://wiki.wargaming.net/en/index.php?title=Ship:Brindisi&oldid=317663"
Categories:
Your location:
To log in, select the region where your account is registered
CIS Europe North America Asia
Or use Microsoft Login to enter WoT XBOX ecosystem
Log in