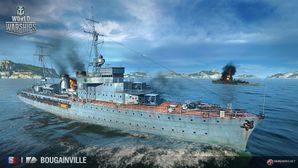 The largest and most powerful representative of the aviso type, the French Navy equivalent of sloops and gunboats. This warship was intended for colonial service abroad and carried armament that was quite good for her size.

The gateway to the Marine Nationale in World of Warships starts here with Tier I's Bougainville. She represents a class of avisos (dispatch boats) that were constructed in the 1930s.

Bougainville has a long rudder shift time and slow top speed to go with almost no armor protection to speak of. Her speed and rudder shift time combine to make her handle sluggishly for a Tier I ship — especially compared to the likes of Black Swan or Orlan.

Like all Tier I ships, Bougainville has no researchable upgrades.

With only one upgrade slot, options are limited. Captains who wish to invest the credits for the game or three they will spend in Bougainville are advised to equip Magazine Modification 1

Bougainville was the lead ship of a class of nine (ten planned) avisos of the French Navy, launched on 25 April 1931 and commissioned on 15 February 1933. The ship was designed to operate from French colonies in Asia and Africa and was initially stationed in the Indian Ocean. In 1935 she was transferred for service in the eastern and southern Mediterranean, and in early 1939 to Djibouti, returning to Toulon escorting a group of submarines after the outbreak of World War II.

She sided with Vichy France and was sunk off Libreville by her sister ship Savorgnan de Brazza on 9 November 1940 in the Battle of Gabon. Although she was refloated in March 1941, she sank again and remained so until she was broken up for scrap in 1952.

Ships of France
Cruisers
Retrieved from "http://wiki.wargaming.net/en/index.php?title=Ship:Bougainville&oldid=317451"
Categories:
Your location:
To log in, select the region where your account is registered
CIS Europe North America Asia
Or use Microsoft Login to enter WoT XBOX ecosystem
Log in