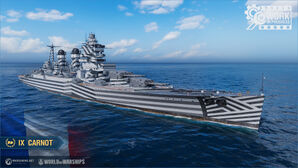 A variant of the project of a super-heavy cruiser that was the predecessor of the Dunkerque-class ships.

Carnot was first released for sale on 17 September 2021 for WoWs' 6th Anniversary!

Carnot is a French super cruiser and the first of its kind added to the French navy represented in the game. Carnot features a turtleback armor layout, large caliber artillery with high accuracy but long reload, and a high speed hull that surpasses most at the tier.

Carnot resembles a supersized Henri IV and is something of a cross between Henri IV and Alaska, combining Henri IV’s high speeds and ‘’Alaska’s’’ large, heavy-hitting guns.

Her bow and stern armor is covered with 25mm plating, meaning she can be citadelled through the bow and stern by a 381mm or larger shell. Carnot’s survivability primarily comes from her turtleback-protected citadel sides, with 180mm lower side plating and torpedo protection for her waterline citadel. Her upper casemate armor consists of 30mm plating along most of the ship.

Carnot has a uniquely arranged main armament, with 2x3 and 1x4 305mm turrets — one triple mount and the quad mount forward and the other triple mount aft — bringing her total main armament to ten (10) 305mm rifles. To fire a full salvo, Carnot does not need to show a significant amount of broadside to get all of its guns on target while angled forward. Each HE shell has a 25% chance at starting a fire, a max damage of 4250, and penetration of 51mm with no modifications applied. The AP shells have an alpha damage of 8700 with no modifications applied. Her guns have a stock reload of 25 seconds, and can be reduced to 22 seconds if players choose to mount Main Battery Modification 3

. They have a maximum range of 18.6km which can be extended an extra 2.9km by mounting Gun Fire Control System Modification 2

. They are extremely accurate with a sigma of 2.05, and a well-aimed salvo can be extremely punishing to those caught broadside.

Carnot has a solid AA suite for the tier and does not need to be further upgraded but if players choose, they can further improve the AA by swapping Hydroacoustic Search

, giving Carnot the ability to have an extremely potent AA suite.

Carnot, like most of the French cruisers, should stick to flanks using its speed to get to positions and its powerful artillery to set up cross fires. Players should mount Engine Boost

to get to and from positions allowing them to set up a crossfire more quickly, dodge incoming fire, or reposition elsewhere. Carnot should focus on broadsiding cruisers and upper decks of battleships with AP and use HE only when ships are angled or when firing at a destroyer. Due to Carnot featuring battleship fire duration (60 seconds), players should be careful of the amount of HE focus they receive as being set on fire can cause more damage than a heal can return.

As a premium ship, Carnot has no module upgrades to research.

Played optimally, Carnot uses her superior speed to get to positions on a flank that allow captains to create crossfire and dodge incoming fire. The latter is extremely important due to the fact that Carnot features battleship fire duration at 60 seconds. In doing so, punishing salvos can land on broadside cruisers and battleships with regularity.

As a premium ship, Carnot comes with Default permanent camouflage and a set of permanent combat bonuses.

Ships of France
Cruisers
Retrieved from "http://wiki.wargaming.net/en/index.php?title=Ship:Carnot&oldid=319651"
Categories:
Your location:
To log in, select the region where your account is registered
CIS Europe North America Asia
Or use Microsoft Login to enter WoT XBOX ecosystem
Log in