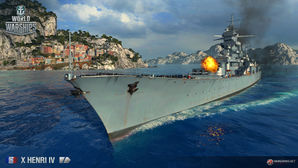 Developed from the preceding project with enhanced anti-aircraft defenses, this cruiser carried 240 mm main guns designed in the 1930s. The ship featured a powerful propulsion plant and a very high speed.

Proudly standing at the peak of the French cruisers tree, Henri IV takes her place alongside the Russian Petropavlovsk, the British Goliath, and the Dutch Gouden Leeuw as one of the “Big Gun” cruisers of Tier X. Henri IV’s key upgrades from her predecessor Saint-Louis are her speed (she is now capable of 35 knots in a straight line) and her new 3x3 240mm cannons, which are the second-largest caliber guns found on all Tech Tree cruisers at Tier X. Her main battery shells have some of the highest armor-piercing damage available to Tier X cruisers and tie with Zao for the 2nd highest high explosive damage (behind Goliath). With their excellent penetration statistics, good accuracy, and great range, these guns, combined with the ship's amazing speed, make Henri IV very potent indeed.

Several trade-offs must be made in order to squeeze guns of this caliber on to a cruiser hull: they have a relatively slow reload time, below-average shell velocity, and there are only nine of them. Henri IV is armed with a torpedo configuration that will feel familiar to veterans of the line: a single triple-tube 550mm torpedo launcher on each side of the ship with excellent firing arcs, which boasts a 9.0 km range married with decent reload time, low speed, and moderate damage. Henri IV captains have far fewer torpedoes available than captains of Hindenburg, Minotaur, or Zao and as such, they must be treated as a supplementary or last-ditch weapon. Henri IV’s base AA performance is lackluster, and while it's suitable for self-defense it won’t truly be capable of defending friendly ships.

While Henri IV lacks a catapult to launch a reconnaissance seaplane or catapult fighter, she comes with a choice between Defensive AA Fire

consumable that increases her speed by a massive 20%. Combined with the Sierra Mike (

) signal flag, she is capable of reaching 43.9 knots... which is patently absurd for a cruiser. As with all high-tier cruisers, she also has access to Repair Party

. Her last consumable is the Main Battery Reload Booster

which cuts the reload of her impressive artillery by 50%, allowing for devastating burst damage when used at the correct time. Captains have a choice between Defensive AA Fire for a massive increase in her AA performance, or Hydroacoustic Search for hunting destroyers, something the speed-demon Henri IV excels at.

Similar to the rest of the French cruisers, Henri IV’s armor shouldn't be relied upon. While she does have a large health pool among the Tech Tree Tier X cruisers, her large size and poor concealment coupled with her limited armor can lead to an over-extending Henri IV being sent back to port very quickly. Henri IV’s speed can almost work against her, as she must avoid overextending at all costs, something that is a tad difficult in a ship that goes so fast. One should also be aware that her base acceleration has been toned down, meaning that maneuvers involving playing with the ship's speed to dodge enemy attacks are now riskier without her Engine Boost online. Overall, Henri IV offers a unique playstyle with her excellent guns and speed, which becomes more rewarding the longer that she lasts in battle.

As a Tier X ship, Henri IV has no additional modules to research.

Condé is researched off Henri IV at a cost of 1 XP.

The recommended upgrades for Henri IV are as follows:

Henri IV is a fabricated design by WarGaming, but many elements of her design have roots in actual French cruiser design and post-war armament designs.

Her 240mm main gun was an unbuilt theoretical heavy cruiser gun. There was a 240mm gun produced by the French navy, and that type was used on the Danton-class pre-dreadnought battleships as secondary battery, mounted in six twin turrets. The guns, the 240mm/50 Mle 1902, were later used as coastal artillery after the ships were broken up, and served during the Second World War, notably in the Battle of Dakar. One open-top twin gun turret is preserved at the battery Castel Gorée, where it has been installed after 1934 to the older coastal defence armoured turret.

Her dimensions and top speed suggest that she probably uses the hull of "Navire de Ligne de 17 500t", a smaller alternate design considered in 1926 for the program that eventually became the Dunkerque-class battleships. Henri IV's armament is however completely different, as that design called for a armament of 305 mm/55 main guns in a pair of quad turrets, using the same all-forward configuration as Dunkerque and Strasbourg.

Henri IV is actually the name of a pre-dreadnought battleship that was built in the late 1890s. No other ship has inherited the name ever since.

Ships of France
Cruisers
Retrieved from "http://wiki.wargaming.net/en/index.php?title=Ship:Henri_IV&oldid=322708"
Categories:
Your location:
To log in, select the region where your account is registered
CIS Europe North America Asia
Or use Microsoft Login to enter WoT XBOX ecosystem
Log in