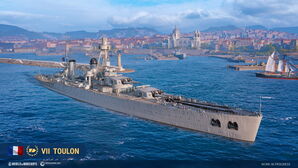 A project of "a battleship with a displacement of 17,500 tons," which was effectively a super-heavy cruiser. The main purpose of the ship was to oppose "Washington" cruisers.

Toulon was first released for sale on 18 May 2022 with Update 0.11.4, and was initially available in 1 of 62 random doubloon bundles in the Armory.

As a premium ship, Toulon has no module upgrades to research.

is recommended in slot 2 for players that have large coal reserves, to further boost Toulon's Engine Boost duration. But for those short on coal, it may be better to save that upgrade for the higher tier tech tree large cruisers.
In Slot 4, both Propulsion Modification 1

Toulon comes with the Type 10 permanent camouflage that lowers her detection radius, reduces the accuracy of incoming shells, reduces her service cost, and increases the amount of experience she earns.

Ships of France
Cruisers
Retrieved from "http://wiki.wargaming.net/en/index.php?title=Ship:Toulon&oldid=318149"
Categories:
Your location:
To log in, select the region where your account is registered
CIS Europe North America Asia
Or use Microsoft Login to enter WoT XBOX ecosystem
Log in