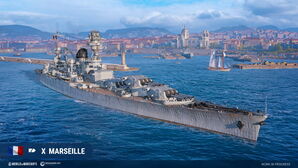 Super-heavy cruiser with a displacement of over 30,000 tons. Her main armament comprises nine 330 mm guns concentrated in three turrets at the ship's bow.

Marseille was first released in Early Access in Update 0.11.4.

As a top-tier ship, Marseille has no module upgrades to research.

is recommended in slot 2 for players that have large coal reserves, to further boost Marseille's Engine Boost duration. But for those short on coal, Engine Room Protection

should be used instead.
In Slot 4, both Propulsion Modification 1

Ships of France
Cruisers
Retrieved from "http://wiki.wargaming.net/en/index.php?title=Ship:Marseille&oldid=318487"
Categories:
Your location:
To log in, select the region where your account is registered
CIS Europe North America Asia
Or use Microsoft Login to enter WoT XBOX ecosystem
Log in