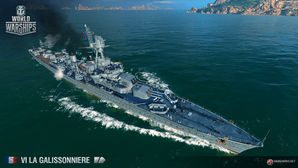 Tier VI's La Galissonnière has a main armament of nine 152mm guns on three turrets with an AB-X turret configuration, as well as a twin tube torpedo launcher on each side. Her main guns have fast shell velocity and decent range, along with a high fire chance for 152mm high explosive shells at 12%. While the reload is slower than other 152mm-gunned cruisers, this high fire chance makes her a threat to enemy ships, forcing them to use Damage Control Party

to put out fires or suffer large amounts of damage. Her armor piercing rounds are decent at short ranges and plunging fire citadels are possible, while her torpedoes are different from those of most cruisers at this tier, featuring a 9.0 km base range and only two tubes per side. Instead of a point blank self-defense weapon able to delete full health battleships, La Galissonnière’s torpedoes are more long range harassment and area denial weapons, good for throwing around islands and into caps hoping to hit unsuspecting enemies.

Like most cruisers, she is fairly soft and will take large amounts of damage from anything that lands shells on her. She handles somewhat sluggishly, bleeding large amounts of speed in turns. However, while slower on paper, La Galissonnière is given access to the Engine Boost

consumable, allowing her to increase her speed significantly and making her lower top speed a bit less noticeable. Her anti-aircraft armament is comprised mainly of quad 40mm Bofors and 20mm mounts, and while it's sufficient for self-defense, her long range AA power is badly lacking; she's not a ship that her teammates can rely on for anti-aircraft support.

Research the B hull first. The extra health and agility are worth more than the extra range.

Ships of France
Cruisers
Retrieved from "http://wiki.wargaming.net/en/index.php?title=Ship:La_Galissonnière&oldid=318538"
Categories:
Your location:
To log in, select the region where your account is registered
CIS Europe North America Asia
Or use Microsoft Login to enter WoT XBOX ecosystem
Log in