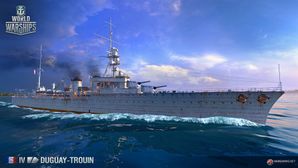 The world's first large warship designed and built after World War I. The ship had virtually no armor protection but carried very powerful torpedo armament. An innovation that was implemented on this type of ship was the arrangement of her main guns in twin-gun superfiring turrets.

Overall, Trouin’s profile is rather large and her main battery reload is on the slow side for 155mm guns, though the guns are comfortable to fire. Her rudder shift is worst-in-tier and her concealment is quite poor, which makes her an easy and obvious target for enemy ships. Additionally, her armor is virtually non-existent (like all other Tier IV cruisers). She has plenty of speed and a generous torpedo armament, though the range on them means that they are best suited for ambushes from behind islands or against distracted battleships.

Her rudder, along with the other French cruisers, tends to feel prone to incapacitations; captains may wish to equip Engine Room Protection

As a Tier IV cruiser with a good fire chance, Victor Lima (

) are the most recommended for extra fire damage. Victor Lima & India X-Ray increase the fire chance while also increasing chances of you getting flooding and being detonated, thus Juliet Charlie is used to counter the de-buff effect. November Foxtrot (

) can assist in reducing cooldowns for the consumables slightly, but may be life-saving (such as having Hydroacoustic Search ready and activated in time to evade enemy torpedo salvo). Sierra Mike can also be handy for getting around to places, as this increases Duguay-Trouin’s speed to a good 34.7 kts. Equal Speed Charlie London (

) can assist captains with increased experience gain per battle and faster commander (re)training. 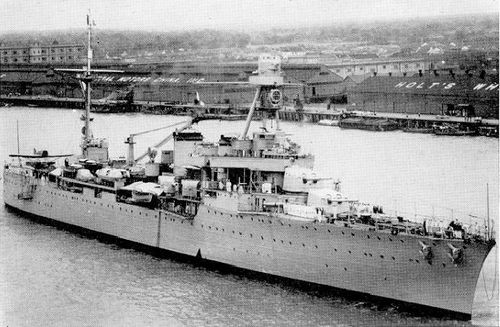 Named after René Duguay-Trouin (1673 – 1736), Vice-admiral and Commander in the Order of Saint-Louis, Duguay-Trouin was the lead ship of a class of French light cruisers, launched in the early 1920s. She was the first in a series of three French light cruisers built after World War I. However, in their unfortunate history, they illustrated and represented the internal conflicts and dichotomy of the French armed forces of the time: Duguay-Trouin was briefly disarmed and interned by the British in June 1940, then re-armed and joined the Allies in May 1943; Lamotte-Picquet patrolled around French Indochina for two years before becoming becoming a training ship and then subsequently sunk and scrapped by the Allies; and Primauguet was sunk by the Allies at the Battle of Casablanca.

Commissioned in 1926, Duguay-Trouin serviced in France and French Indo-China prior to World War II. After France declared war on 3 September 1939, she was assigned to patrolling the Atlantic Ocean, intercepting German merchant ships. Eight months later in May 1940, Duguay-Trouin was transferred to Beirut to operate in the eastern Mediterranean, in the Adriatic Sea and around the Dodecanese. After the French surrender and under René-Émile Godfroy's command, she was interned and disarmed by the British at Alexandria, Egypt in late June 1940 until May 1943, when she joined the Allied fleet.

Duguay-Trouin was re-armed in July 1943 and did not deploy until nearly half a year later in early 1944, simply transporting troops. She provided artillery support during the Operation Dragoon landings in August 1944 and along the Italian coast until April 1945. In her post-World War II service, Duguay-Trouin participated in the bombardment of Algeria during the Sétif and Guelma massacre in May 1945 and later sent to Indo-China to support operations against the Việt Minh. She served as a depot ship until she was decommissioned on 19 March 1952.

Duguay-Trouin had a fairly uneventful service history, partly due to her three-year internment at Alexandria.

Ships of France
Cruisers
Retrieved from "http://wiki.wargaming.net/en/index.php?title=Ship:Duguay-Trouin&oldid=317453"
Categories:
Your location:
To log in, select the region where your account is registered
CIS Europe North America Asia
Or use Microsoft Login to enter WoT XBOX ecosystem
Log in