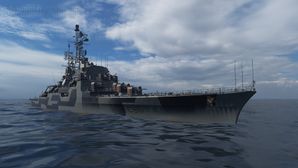 Colbert proudly serves at Tier X, representing France. She is equipped with numerous small-calibre main guns sporting lightning-fast turret-traverse time and rate of fire. This blistering firepower can prove to be overwhelming to nearly any ship unlucky enough to find herself on the receiving end of a barrage from these guns.

As a French ship, Colbert is fast. She has access to the Speed Boost consumable, which is most effective when paired with a sierra-mike signal flag. Players intending to deploy Colbert in open water must utilize her speed and employ evasive manoeuvres in order to avoid being sent back to port prematurely. Colbert has a quick rate of fire, but her armour and low gun-calibre restrict her ability to hold out against more-heavily armoured ships with large-calibre guns, such as her tech-tree counterpart, Henri IV. Her stock firing range is relatively lacklustre, meaning that players should expect to devote at least four commander points and/or an upgrade module slot to extending her gun range. Colbert can be a very rewarding ship to play, but she demands a captain who will utilize her strengths to play strategically. Her speed can get her into dangerous situations very quickly--without a torpedo armament or access to a smoke screen consumable, a bold playstyle will likely be punished very harshly by the enemy. Luckily, she has access to numerous charges of the Repair Party

consumable to restore hit points after a close call.

As a premium ship, Colbert has no module upgrades to research.

The recommended upgrades for Colbert are as follows:

should be equipped in Slot 2.

Colbert can equip the following consumables:

Colbert comes with Type 20 permanent camouflage that lowers her detection radius, reduces the accuracy of incoming shells, halves her service cost, and increases the amount of experience she earns.

The last pure-gun cruiser built by the Marine Nationale, the Colbert was the sole product of what was initially a far more ambitious program. After the Second World War, France was desperately short of cruisers – only three heavy cruisers survived, all obsolescent and useless designs used only as depot ships, as was one of the older light cruisers, while others were used as training ships. Of the six modern La Galissonnière-class light cruisers, half were lost at Toulon, while the other half managed to survive the war. These three cruisers – Glorie, Montcalm, and Georges Leygues – would form the core of France’s post-war cruiser force.

Immediately following WWII, the French Navy began to work on its future fleet structure. As early as March 1945 studies were begun to explore the possibility for a new type of light cruiser with twelve 152mm guns in four triple turrets (the project was abandoned in January 1948). According to the fleet plans drawn up in 1946 and 1947, the Marine Nationale wished to operate two (initially three) battlegroups, one of which could be placed at the disposal of the new NATO alliance. In order to achieve this, a force of twelve cruisers were planned by 1960 – three new light cruisers, and six specialized anti-aircraft cruisers. Ultimately, though, France’s financial situation prevented this from being completed, even with a substantial injection of cash from NATO funds (read: America) in 1949. No additionally light cruisers could be ordered, and ultimately only two of the six anti-aircraft cruisers could be completed – the first was the cruiser De Grasse, laid down before the war and completed to a revised design serving as the prototype for the new AAW cruisers, and the second was Colbert herself, based on De Grasse’s completed form.

Colbert weighed in at about 9,230 tonnes standard, and 11,587 tonnes fully loaded – about a thousand tons lighter than the 9,530/12,520-ton De Grasse. The hull was slightly shorter and beamier, which contributed to the slower design speed. Propulsion power was 86,000 CV on two shafts (Parsons shaft geared turbines) for a design speed of 32 knots. Power was supplied be four Indret 45 kg/cm2 (450ºC) boilers, and despite the reduction of fuel load (from 1,850 tons to 1,708 tons) endurance was substantially increased (from 6,000 to 7,000 nm at 18 knots). Due to the ship’s purpose-built role as an anti-aircraft cruiser, she carried considerably less armour, with a 50-80mm armour belt protecting her machinery spaces and a 50mm armour deck over the machinery spaces.

The armament remained identical to what was fitted on De Grasse – sixteen 127mm/54 Mle 1948 in eight twin mounts. The gun was largely a copy of the American 5”/54 Mk.16, and used the same ammunition – firing shells of 31-32 kg at a velocity of 808 m/s with a 9,000-meter AA ceiling, the guns had good ballistic performance and a high rate of fire in the order of 15-18 rounds/minute. Fully dual-purpose, the guns were serviced by four directors, each equipped with a rangefinder and a DRBC 31B fire control radar. This long-range air defence capability was backed up with a powerful battery of medium AA guns, the ubiquitous 57mm/60 Mle 1951. This French AA system was based around the Bofors 57mm AA gun, which fired 2.6 kg projectiles at a velocity of 865 m/s and a cyclical rate of fire of 120 rounds/minute. They were divided into four groups (fore, aft, port beam, starboard beam), each controlled by a director with a DRBC 31A fire control radar.

In 1970 the ship began a major refit that largely reworked the design, to make it better optimized for modern anti-aircraft warfare. All armament and fire control were stripped from the ship and the superstructure reduced. Ballistic armament was reduced to two 100mm/55 Mle 1968 single mounts forward, modern dual-purpose guns firing 13.5 kg shells at 867 m/s with a 6,000-meter ceiling and 9,000-meter effective range. Rate of fire was an impressive 60 rounds/minute, and fire control was conducted via directors using the DRBC-32C fire control radar. However, the main anti-aircraft armament was the twin launcher for the Masurca Mk.2 mod 2 SAM (Surface-to-Air Missile), a super-sonic (Mach 3) anti-aircraft missile with a range of 55 km and 30 km ceiling. 48 missiles were carried in the magazine, with the entire system weighing 450 metric tons. Target acquisition was first achieved with DRBV-23C Jupiter air search radar, a long-range 2D radar that would identify, out of the incoming, the two highest-priority targets, which would then be transferred to the pair of DRBR 51 fire control radars, which provided guidance for the Masurca Mk.2’s (which on paper used a semi-active radar homing, and thus required terminal guidance from the DRBR 51’s – however the mod.2 had a simpler proximity fuse and was extremely reliant on the fire control radars). Two missiles could be in the air and guided at the same time, although it was also possible to fire off multiple missiles, picked up by the guidance radar while they sped in the general direction of the target. However, the missiles were bulky, and thus slow to load from the magazines onto the launching arms. The refit was completed in 1972, and shortly after the missiles were replaced by the updated mod.3 versions, with a superior guidance system (a true SARH system). In 1980, four single box launchers were added for the MM38 Exocet anti-ship missiles, as were the associated DRBV 51 Triton fire control radars. These subsonic sea-skimmers (315 m/s) had a range of 42 km and packed a 165 kg warhead.

Ships of France
Cruisers
Retrieved from "http://wiki.wargaming.net/en/index.php?title=Ship:Colbert&oldid=316831"
Categories:
Your location:
To log in, select the region where your account is registered
CIS Europe North America Asia
Or use Microsoft Login to enter WoT XBOX ecosystem
Log in