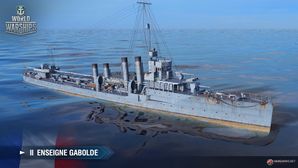 An experimental destroyer equipped with a new type of turbine. The ship was laid down before the start of World War I, and was completed after the war ended. Based on the experience gained during wartime, the ship was armed with more powerful armament—in particular, formidable 550 mm torpedo tubes.

Availability of researchable upgrades for Enseigne Gabolde is as follows:

The recommended upgrades for Enseigne Gabolde are as follows:

Enseigne Gabolde was a destroyer of the French Navy. Originally laid down in 1913 as a member of the Enseigne Roux-class, construction was suspended in 1914 while the ship was still on the slips and not resumed until near the end of the war. After extensive modifications, most notably the addition of a third, superfiring 100 mm (3.9 in) gun forward, the ship was launched on 23 April 1921, and finally completed in 1923. She was struck in 1938.

Originally meant to be one of the Enseigne Roux-class destroyers, Enseigne Gabolde ultimately became a one-off experimental design. The Enseigne Roux-class was the final addition of the ‘800-tonne’ type destroyers, a type which had almost doubled displacement over previous French destroyers in order to increase top speed to a respectable 30 knots, and incorporate two 100mm guns (over a previously uniform 65mm armament), and two twin 450mm torpedo mounts. Improvements of the Enseigne Roux-class over the prior 800-tonne type (Bisson-class) were fairly minimal – a slight increase in displacement and overall length, with a corresponding increase in machinery power to maintain a 30-knot top speed. Unlike prior French destroyers, they incorporated a tripod mast.

Normal displacement was 850 tons, reaching 1,075 tons at full load. Four boilers powered two direct steam turbines, producing a combined 17,000 shp for the aforementioned top speed. Armament consisted of two 100mm/45 Mle 1893, with four 65mm/50 Mle 1902 backing them up. Although much smaller weapons (A 100mm shell weighed four times as much as a 65mm shell) with lesser effective range (1,000 meters versus 2,500 meters), they were light, and the French appreciated their high rate of fire (13-14 rpm) compared to the 100mm guns.

The difficulties the Marine Nationale had with the 800-tonne type was considerable, mainly due to the fact the same designs produced widely different results depending on the yards that built them. Ships of the same class could have top speeds five knots lower than other examples, and experience vibrations at different speeds, making it extremely difficult to form homogeneous divisions. High fuel consumption lead the Marine Nationale to install reduction geared turbines on the third member of the Enseigne Roux-class, in the hopes of gaining superior operational radius. This ship, Enseigne Gabolde, was laid down in June of 1914 (a year after her sisters), but this proved to be poor luck – the demands of the First World War put a halt on most French construction, and thus Gabolde languished on her slip.

In the long term, however, this proved to have been better luck than first supposed. French experience with Italian ‘esploratori’ (scouts) in the Adriatic in the clashes between the Regia Marina and k.u.k. Kreigsmarine had influenced French destroyer design, and this was further reinforced with the addition or large destroyers received from the German Kaiserliche Marine as war booty. Thus, when Enseigne Gabolde was revisited post-WWI, it was decided to trial out a number of new equipment types on her. Dimensions and displacement grew slightly, and machinery power was raised to 20,000 shp. The forward section was built up to allow a third 100mm gun to be fitted, super-firing over the foremost 100mm gun, and the 65mm guns were dispensed with. The 450mm twin torpedo mounts were replaced with experimental 550mm mounts, and a 75mm AA gun was fitted. The bridge structure was also more significant. Although this proved to be detrimental to the ship’s combat capabilities due to the small displacement, it served as an important technology demonstrator.

Ships of France
Destroyers
Retrieved from "http://wiki.wargaming.net/en/index.php?title=Ship:En._Gabolde&oldid=290443"
Categories:
Your location:
To log in, select the region where your account is registered
CIS Europe North America Asia Republic of Korea
Or use Microsoft Login to enter WoT XBOX ecosystem
Log in