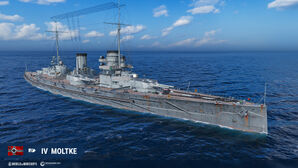 The Moltke-class battlecruisers embodied a further development of Von der Tann. Compared to her predecessor, she had larger dimensions, a larger number of main battery guns, and more durable armor protection.

Moltke was first released for Prime Gaming subscribers in Sept 2021 and for Early Access with Update 0.10.9.

Moltke Is the second battlecruiser in the German battlecruiser tech tree. She is an upgrade over Von der Tann, featuring one (1) more turret bringing the total to five (5) twin 283mm turrets, good range, fastest speed at 28.4km base of all the Tier IV battleships, best concealment of the battleships at the tier sitting at 10.9km base, and an improved secondary armament with a max range of 6.05km.

Moltke as a German design battlecruiser, opts for heavier armor and a lighter armament. Her lower fore and entire aft end armor belt is 100mm thick, with the upper fore end belt a lighter 80mm plate. She also has a second fore armor plate behind the 100mm belt with a 120mm plating. Higher up on the bow and stern however only has 19mm plating, making it easier for smaller caliber guns to penetrate and the possibility for enemy battleships to penetrate and hit the citadel. Her main armor belt consists of a lower 200mm belt, 270mm plating along the waterline, and a larger 200mm plate that goes up to the secondary battery mounts. That is then followed by a 150mm upper belt surrounding the secondary battery mounts and center main armament, making it difficult for larger shells to penetrate if players are angled to incoming fire. Moltke’s superstructure covered in 13mm plating, however there is very little superstructure on the ship, making it difficult for smaller guns to cause damage without setting fires.

Moltke is armed with five (5) twin 283mm turrets in a very odd layout. commanders with experience in Konig Albert and Kaiser will be familiar with this gun layout, one (1) turret is on the centerline facing forward, with two (2) more facing aft. The remaining two (2) are mounted en echelon at the center of the ship, allowing each side’s gun to fire across the ship at narrow angles to allow a full broadside shot. The guns have a range of 14.9km, which is average for the tier. A special feature of the German battlecruisers is the battlecruiser dispersion formula featured on Graf Spee and Alaska, leading to an overall more accurate main battery than battleship counterparts. However with a poor sigma of 1.5, and a turret traverse of 45 seconds, the risk and time it takes to show a large amount of broadside may outweigh the reward for having all guns on target. The guns reload in 30 seconds and have an alpha strike of 72,000, with each AP shell having an alpha damage of 7200. Due to the tier and small caliber of the guns however, HE may be the preferred ammo choice in most situations. The HE has a max damage of 3200 but has a 19% fire chance, further supporting the use of HE shells.

Moltke is also equipped with an impressive secondary battery that features improved accuracy and range. Fully upgrading the secondaries can bring the range to 6.05km, which is more than both the detection and torpedo ranges of most destroyers at the tier.

Moltke has subpar AA, with an average damage per second of 13 and a range of 3.99km. To put Moltke at a further disadvantage, she only has one (1) flak explosion to aid the continuous AA. This leaves her vulnerable to multiple attacks by an enemy carrier with minimal loss of planes.

Moltke should use fast speed and concealment to get to a flank early in the battle. Due to the lack of large caliber guns HE should be fired on all angled targets, with AP being used only on broadsides. Moltke can use its concealment to get in closer than the other Tier IV battleships to surprise enemies. The concealment can also be used to disengage and reposition if a flank becomes unwinnable or if Moltke is being heavily focused by the enemy team. If a flank is winnable however, players can move in close to use the secondary battery to aid in finishing low health targets, setting fires, or damaging lightly armored ships and superstructures.

Availability of researchable upgrades for Moltke is as follows:

The recommended upgrades for Moltke are as follows:

Moltke can equip the following consumables:

Only four 88 mm secondary guns on the aft superstructure had anti-aircraft capability. The other 88 mm guns were removed from Moltke when she received her Flak L/45 guns.

Ships of Germany
Battleships
Retrieved from "http://wiki.wargaming.net/en/index.php?title=Ship:Moltke&oldid=320915"
Categories:
Your location:
To log in, select the region where your account is registered
CIS Europe North America Asia
Or use Microsoft Login to enter WoT XBOX ecosystem
Log in