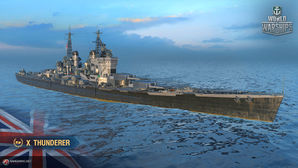 This ship was designed as a battleship with increased firepower on the basis of the British experience in ship construction gained during World War II. The project was notable for the 457 mm main guns, which were developed in the early 1920s and were the most powerful British naval artillery systems.

Thunderer exists as the sister-ship of the Tier X U.K. battleship, Conqueror. As such, she shares many of Conqueror's in-game performance characteristics and weaknesses. Despite the similarities, Thunderer possesses certain distinguishable traits that differentiate her. Immediately, players will notice that she has access to the Defensive AA Fire (

) consumable. Players will also find that Thunderer is more agile, with slightly increased turret traverse speed, and decreased reload time. She deals damage to aircraft with a short-range anti-aircraft armament, which Conqueror is lacking. To balance these traits, her Repair Party (

) consumable is slightly less effective, though she has an additional charge and decreased cooldown time of this consumable in comparison to her sister-ship. Other differences include her sigma and the fuse timer settings on her armor-piercing (AP) shells.

Thunderer is equipped with dual-mounted 457mm main guns, mounted in four turrets. A full salvo unleashes eight shells which are extremely accurate, meaning that Thunderer has a very high potential to inflict devastating damage to an enemy foolish enough to show their broadside. Her large-caliber AP rounds are capable of penetrating thick armor to reach the citadels of armored ships. Players are advised to switch to high-explosive for lesser armored targets in order to avoid overpenetration. Thunderer's HE shells sport a decent fire chance, as well, adding another incentive for using this ammunition type. Her stock decreased reload time, paired with the proper upgrade module, means that Thunderer has a reload time more in line with a battlecruiser, rather than a battleship. Her excellent concealability affords her the ability to choose her engagements and wait for the opportune moment to fire. Thunderer is truly a formidable opponent, whether she be fighting naval units or aircraft. She can be customized and equipped to fit several different playstyles, and she will surely be seen excelling in her captain's desired role.

As a premium ship, Thunderer doesn't have any upgrades to research.

The recommended upgrades for Thunderer are as follows:

). For players who wish to specialize for anti-aircraft duties, Auxiliary Armaments Modification 1 (

), and Concealment Expert in order to provide her with better ability to choose her engagements.

Thunderer can equip the following consumables:

As a premium ship, Thunderer comes included with Type 20 camouflage that lowers her detection radius, reduces the accuracy of incoming shells, reduces her repair costs, increases her credits earned per battle, and increases the amount of experience she earns.

Ships of U.K.
Battleships
Retrieved from "http://wiki.wargaming.net/en/index.php?title=Ship:Thunderer&oldid=293255"
Categories:
Your location:
To log in, select the region where your account is registered
CIS Europe North America Asia Republic of Korea
Or use Microsoft Login to enter WoT XBOX ecosystem
Log in