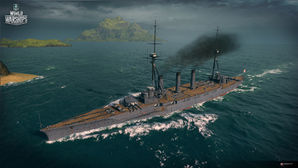 A very high speed battlecruiser design with relatively weak armor typical of this type of ship. It was a prototype for the Kongo-class battlecruisers.

Myogi can be fun and it can be a nightmare. At stock, most people would not appreciate it at all. With a 13.9 km range and a top speed of 25.3 knots, it is still pretty decent for stock configuration. However the nightmare part comes because unlike the previous Kawachi, and the US and German dreadnoughts, Myogi is only equipped with 6 356mm guns arranged in three twin turrets with two turrets at the rear. With its stock hull, Myogi will easily be shot full of holes by anything before it can return fire. Not to mention, with only 6 guns and a slow reload, you can't really do anything once you have missed but wait for the gruesome reload while getting peppered by enemy vessels. To add salt to the wound, the Myogi doesn't have any AA guns until her third hull upgrade, which means you can only evade the torpedoes and bombs from aircraft or just pray your armor absorbs the damage.

Once the time and effort had been spent to fully upgraded her however, Myogi is a solid-performing tier 4 battleship. With a gun range of 18.6km or more if a scout plane is used, the only thing on the battlefield she has to worry about are any other fully upgraded Myogis or elder sisters such as the Kongo, since there are no other dreadnoughts she faces that have such a long reach. Also equipped on her is a relatively powerful array of Anti Aircraft guns, capable of holding her own against squads of enemy planes. If her AA guns fail to perform, with her impressive top speed of 29 knots, she can get out of tight corners and trouble. While it is awful in the beginning, she is a valuable asset to the team once upgraded and can really become a powerful influence on the battlefield. You should play like a battlecruiser, not a true battleship, as her armor is poor and so are her guns.

Since Myogi only has six guns with fairly long reload and poor armor, she can't afford to get in a close quarter fire fight with basically any other ship. With her stock speed still pretty decent for a battleship, your first priority should be the C hull, as it across the board improves the ships play style and gives her AA protection which at this tier and further on is a must. Then research the fire control system upgrade which can bring her range to the impressive 18.6km which enables her to fight at a distance most ships can't reach. Finally, research the engine to bring her to her top speed of 28 knots.

The recommended upgrades for Myōgi are as follows:

Players can equip the following consumables on Myogi:

Myogi comes with 21 signal flag slots. The three most important flags are India Delta, Juliet Yankee Bissotwo and India Yankee; all of which will improve your survivability.

Myogi (妙義, named after Mount Myōgi in Gunma Prefecture) is based on Project B-40 which was a preliminary battlecruiser design drawn up by Sir George Thurston for the Imperial Japanese Navy. The B-40 was one of three designs originally submitted to the Japanese for consideration: B-39, B-40, and B-41. All three were rejected as the Japanese didn't consider them adequate for their needs, but their design was further developed upon and would eventually result in the Kongo-class battlecruiser (B-46).

Since B-40 was never built she never received a name historically, and the name "Myogi" — which was never given to any warship of the IJN in real life — was given to the design by Wargaming in accordance with the Imperial Japanese tradition to name battlecruisers after mountains.

Ships of Japan
Battleships
Retrieved from "http://wiki.wargaming.net/en/index.php?title=Ship:Myogi&oldid=311026"
Categories:
Your location:
To log in, select the region where your account is registered
CIS Europe North America Asia Republic of Korea
Or use Microsoft Login to enter WoT XBOX ecosystem
Log in