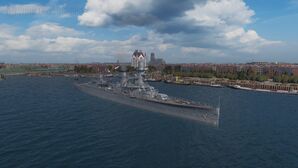 A light cruiser built to defend the interests of the Netherlands in the Pacific. Her main battery guns were placed in superfiring turrets.

Just like her Tier III comrade, De Ruyter has no access to torpedoes and thus has to rely on gunpower alone. While she does loose 30% of the guns on paper, the favorable arrangement results in better overall firing angles, which when coupled with the much reduced reload time and good gun range offers solid damage dealing. On top of that, De Ruyter has access to the Spotting Aircraft

Where De Ruyter may feel like a downgrade is in terms of citadel protection. No longer featuring a turtleback, De Ruyter's chance of surviving AP salvos at close ranges is drastically reduced. To avoid this De Ruyter has to maintain an angle to threatening ships, and avoid taking hits.

As for the preferred playstyle, De Ruyter is best played at range, hitting targets with HE shells and avoiding return fire as much as possible. Close range engagements are to avoid at all cost, as De Ruyter lacks the effective means to dispose of threats quickly.

The recommended upgrades for De Ruyter are:

De Ruyter can equip the following:

Ships of Netherlands
Cruisers
Retrieved from "http://wiki.wargaming.net/en/index.php?title=Ship:De_Ruyter&oldid=314306"
Categories:
Your location:
To log in, select the region where your account is registered
CIS Europe North America Asia Republic of Korea
Or use Microsoft Login to enter WoT XBOX ecosystem
Log in