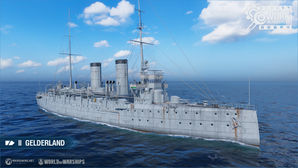 A Holland-class protected cruiser—a typical cruiser from the turn of the 20th century. After having received a number of armament modifications, her main battery comprised eight 120 mm guns mounted on the deck.

Tier I Van Kinsbergen is effective at tier. Gelderland is less so. In particular, her AP shells seem to over-penetrate everything they hit at Tier II yet can't penetrate the thick armor of many cruisers at Tier III. Given the sloped roofs of most citadels at these tiers, her AP might be best at range when the high trajectory can make an effective angle of incidence.

The most effective tactic seems to be firing HE into the upper works or bows and sterns of the enemy.

Since she struggles to do significant damage, a quick progression to Java is encouraged.

Given the terrible dispersion of her guns, the SUO Mk 2 Mod 2 Gun Fire Control System upgrade seems rather pointless.

Ramming an enemy in Co-op seems to be a common way of quickly accumulating damage and leaving the battle. With that strategy, only Sierra Mike, possibly Hotel Yankee (hoping for a second ram) and an econ signal or two make sense. Otherwise, Juliet Charlie is probably the best pick.

Ships of Netherlands
Cruisers
Retrieved from "http://wiki.wargaming.net/en/index.php?title=Ship:Gelderland&oldid=319486"
Categories:
Your location:
To log in, select the region where your account is registered
CIS Europe North America Asia
Or use Microsoft Login to enter WoT XBOX ecosystem
Log in