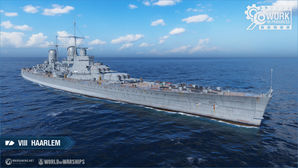 Haarlem is the Tier VIII Dutch cruiser, the first heavy cruiser in the line.

The recommended upgrades for Haarlem are:

Haarlem can equip the following consumables:

Haarlem is a Wargaming-fabricated design. According to Wargaming, it's based on Project 1047. But any resemblance is a far stretch.

Ships of Netherlands
Cruisers
Retrieved from "http://wiki.wargaming.net/en/index.php?title=Ship:Haarlem&oldid=321151"
Categories:
Your location:
To log in, select the region where your account is registered
CIS Europe North America Asia
Or use Microsoft Login to enter WoT XBOX ecosystem
Log in