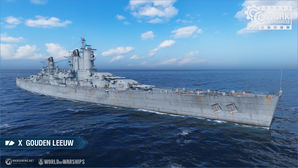 A battlecruiser project (Project 1047) developed in the Netherlands in the late 1930s to counter the Japanese fleet in the Pacific. Her main armament comprised nine German-built 283 mm guns.

Tier X Dutch Cruiser Gouden Leeuw offers a play style like no other Tier X cruiser. She possesses battlecruiser-like armor and main battery guns while having light cruiser concealment. Like all other Dutch cruisers she carries the special airstrike armament.

Gouden Leeuw has an above average armor scheme, featuring a 25mm upper bow with a 40mm “icebreaker” lower bow. This makes it nearly impossible to citadel her through her bow. Her stern plating is fully 25mm easily overmatchable by enemy battleships. However she has excellent 40mm side plating, more than enough to cause all enemy battleship shells to ricochet off when angled. While kiting captains should look to either dodge enemy battleship shells or to ricochet them with this 40mm plate (instead of the 25 mm stern). Despite having an above-waterline citadel her 25mm turtleback makes her citadel relatively resistant to shots from enemy cruisers. However, this does not protect her citadel against battleship AP shells. Finally, captains should beware that Gouden Leeuw burns for 60 seconds rather than 30 seconds, making her vulnerable to fires.

Gouden Leeuw’s guns are nearly identical to that of Tier VII Scharnhorst, sharing her gun caliber and shell velocity while having minor improvements in penetration, salvo damage, and dispersion. Despite an improved 15 second reload, her DPM is still lackluster, ranking among the worst out of all Tier X cruisers. To make up for this, her guns have high shell velocity and great alpha compared to her contemporaries. The AP shells in particular pack a surprisingly hard punch when used against enemy cruisers and battleships. They have enough penetration to citadel enemy cruisers at all ranges and even certain enemy battleships at mid to close range.

Gouden Leeuw’s airstrikes reload every 100 seconds, with a maximum of two charges. They are best used against targets which are large and immobile, whose movements are easier to predict (such as battleships or large cruisers). In addition, due to the pattern of how the bombs fall, more bombs will hit on targets that are bow or stern in to an airstrike rather than broadside to it. These high damaging bombs can penetrate up to 37mm of armor. Used in tandem with main battery HE, Gouden Leeuw can be a great fire starter, using the bombs to force a use of a damage control party and following up with fires due to main battery H.E shells.

With a 12.7 second rudder shift and a 790m turning circle, Gouden Leeuw’s maneuverability is average compared to other Tier X cruisers. The same cannot be said for her AA – she has one of the best anti-aircraft suites at Tier X, with outstanding mid-range continuous damage. As such, her AA menaces enemy aircraft, often destroying entire squadrons before their attack run starts.

For a large cruiser, Gouden Leeuw is surprisingly stealthy. She can use this stealth to reach aggressive positions wherever necessary which she can then hold with her excellent armor.

Gouden Leeuw is unique at tier X in that it combines supercruiser style guns and armor with light cruiser levels of concealment and maneuverability. This gives her a great deal of flexibility, allowing her to play both as an opportunistic ambush cruiser who can reach aggressive but effective positions undetected, and as a kiting cruiser, using her H.E shells in conjunction with her airstrikes to terrorize enemy ships who push in to her. As such, Gouden Leeuw excels on the defensive, either holding key choke points or slowing down an enemy push while kiting away as the situation deems necessary.

As a Tier X ship, Gouden Leeuw has no module upgrades to research.

The recommended upgrades for Gouden Leeuw are:

The ship was to be part of a risk strategy to force an assailant to go to great efforts in a fight against the Dutch East Indies. Although previously a submarine-core was envisioned, a resurgence for a more conventional fleet took place and a new two core risk strategy was developed. The second core would consist of large cruisers that could tie up the enemies' battleships. The most effective size for a cruiser to this need was found to be 25 000 tons. Although Ferwerda seems to have preferred a ship of 16 000 tons.

The Dutch were experienced shipbuilders, but they had not constructed any large warship recently and were unsure about their experience with modern capital-grade armor schemes. They had hoped for the French to share information on Dunkerque, but ultimately turned to the Germans in hope they would share information about Scharnhorst. However, because the ship was in breach of treaties the Germans were very reluctant to share anything about the ship - instead, they provided the Dutch with separate design studies. This caused the Dutch to expand the space for their power plant; after which they went to Italy for more information. Although they improved their underwater protection and learned more about Scharnhorst there than they did from the Germans, they left with few new insights on their propulsion system.

Ultimately, the ship was never laid down due to the German invasion of the Netherlands.

Ships of Netherlands
Cruisers
Retrieved from "http://wiki.wargaming.net/en/index.php?title=Ship:Gouden_Leeuw&oldid=320838"
Categories:
Your location:
To log in, select the region where your account is registered
CIS Europe North America Asia
Or use Microsoft Login to enter WoT XBOX ecosystem
Log in